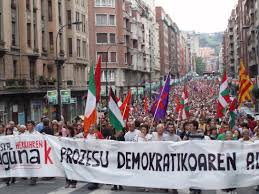 Tens of thousands of people demonstrated in the Basque Country at the weekend demanding that prisoners linked to the former armed separatist group ETA be transferred to jails closer to the northern region.
Spanish government policy has been to keep most ETA prisoners in jails hundreds of kilometres away, which has made it difficult for relatives to visit. After coming to power in June last year, a month after ETA disbanded, Prime Minister Pedro Sanchez pledged to start reversing the policy.
Since that announcement, 19 have been or are in the process of being transferred closer to home, according to Spain’s prison authority.