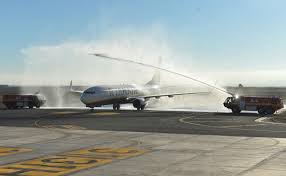 The first aircraft to land at the Murcia International Airport, arrived on Tuesday morning, 25 minutes ahead of schedule. Ryanair flight FR1824, from East Midlands, touched down to the traditional welcome by two water cannon at 10am, with the first passengers to disembark, Annie and Peter Holdsworth.

This is one of the nine routes that the company will operate during the 2019 summer season, which also includes flights to and from Birmingham, Bournemouth, Dublin, Glasgow, Leeds Bradford, London Luton, London Stansted and Manchester.

The opening ceremony itself, however, didn’t take place until an hour or so later, following the arrival of King Felipe VI. The king initially was keen to tour of the facilities, specifically the terminal and the control tower, during which he was accompanied by a whole entourage of local politicians and dignitaries, before officially opening the airport.

They included the president of the Autonomous Community, Fernando López Miras, and the Minister of Development José Luis Ábalos, as well as the government delegate, Diego Conesa, and the mayor of Murcia, José Ballesta.

In total, about 500 guests attended the official opening ceremony, while on the airport fringes, dozens of prison officers and local farmers protested against conditions and the expropriation of their land.

The president of Aena, Mauruci Lucena, said that “the start-up of the Murcia Region International Airport improves and strengthens the Aena network, which aims to offer the best infrastructure to travellers and airlines.”

David O’Brien, the Chief Commercial Officer of Ryanair, said that the company was the first to land in the “newest airport facilities in Spain, our 27th destination in the country, where we expect to transport more than 660,000 passengers over the next 12 months”.

The airport starts with a forecast of one million passengers per year on 12 routes.

The opening of the new International airport followed the earlier closing of San Javier with an overnight exercise involving dozens of staff from the Ministry of Development changing, replacing or moving over 80 road signs, at a cost of 75,000 euro.

The 3,000 passengers that arrived on Tuesday were able to move on to their holiday destinations by  either taxi or public transport.

Murcia taxi drivers have established daily shifts of 29 vehicles at the terminal with the rate between Murcia and Corvera set at 29 euros. Murcia taxi drivers are the only ones who can park at the rank. There will also be four bus lines that will connect the airport with Murcia, Cartagena, San Pedro and San Javier as well as the urbanisations located in the Mar Menor and Campo de Cartagena.