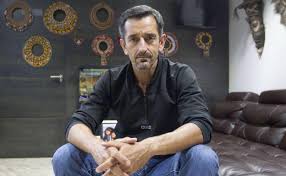 Spain’s world-famous ‘super-surgeon’ Dr Pedro Cavadas has successfully reimplanted a four-year-old boy’s toes ripped off when he became trapped in a fairground ride.

The child’s foot end up wedged into the traction of a mobile staircase at the Christmas fair in he Rabasa neighbourhood of Alicante and, despite attempts by four adults to free him, continued to be jammed in the contraption until it was taken apart with a screwdriver.

Two of his toes were literally hanging off and, knowing of Dr Cavadas’ prowess with refitting severed limbs and transplanting new ones, the child’s father immediately took him to the hospital in Manises, near Valencia airport, a trip of over two hours by road.

Dr Cavadas (pictured) and his team successfully reimplanted the toes and repaired the tendons and veins of these and other parts of his foot damaged in the horrific accident.

According to Manises hospital, the operation went well and the little boy remains in observation.

The fairground ride in Rabasa was initially cordoned off and inspected, but passed all mechanical checks, and has now reopened to the public.

Dr Cavadas, who founded and runs a traumatology hospital in east Africa, has transplanted new legs above the knee and arms above the elbow, and refitted hands, feet, toes and fingers after serious accidents.

In the last few weeks, Dr Cavadas has also operated on Jávea-based triathlete, Scott Gordon, after the British cyclist was gravely injured in a crash caused by a drunk driver on the N-332 in Oliva (Valencia).

After four operations over 18 months, Scott’s broken femur still refused to set and, in desperation, he appealed to the ‘super-surgeon’ in Manises.

Cavadas is said to be very optimistic about Scott’s chances of getting back on his bike eventually, and says the operation was a success.