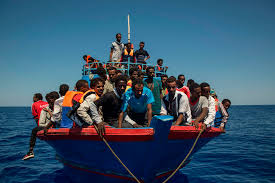 Spain’s maritime rescue service has saved 472 people who were trying to cross the Mediterranean Sea into Europe over the past two days. The service says that 17 people, including one woman, were rescued early this morning from two inflatable rafts, similar to those used at beaches and swimming pools.
455 were rescued yesterday – 124 in the Strait of Gibraltar, and the rest further east. Two of the rescued, who were suffering severe hypothermia, had to be evacuated from rescue vessels by helicopters.