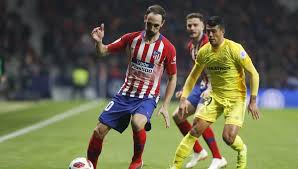 Despite scoring one goal and setting up another, Antoine Griezmann couldn’t prevent Atletico Madrid tumbling out of the Copa del Rey last night as Girona progressed on away goals after a thrilling 3-3 draw.
Real Madrid and Sevilla each avoided upsets, their first-leg victories proving enough despite losses to Leganes and Athletic Bilbao respectively.
Defeat for Real, however, means Santiago Solari’s team have now won only two of their five matches this year.