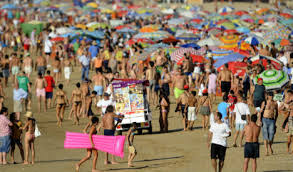 France has not yet published its total for 2018.

Maroto says the number of visitors to Spain last year was up almost 1 percent on 2017. The visitors spent almost 90 billion euros ($103 billion), up 3.1 percent.

Hector Gomez, the head of the Spanish tourism authority Turespana, warned that Britain’s exit from the European Union, European parliament elections in May and possible government elections in Spain make it hard to say how international tourism will perform in 2019.