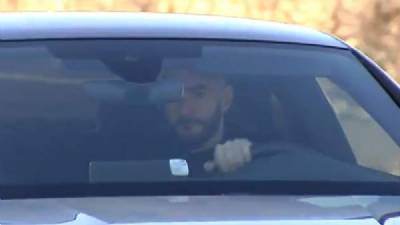 REAL Madrid’s Karim Benzema has once more fallen foul of traffic authorities – just months after being caught filming himself at 120 kilometres per hour on a town road and three years after losing his licence for driving at over 200 kilometres per hour.

This time, the French centre-forward could face a loss of between three and six licence points for driving with his right hand bandaged after breaking the bone linking to his little finger.

Spain’s Traffic and Road Safety Code states, in Article 13.2, that drivers are required to ‘ensure their own freedom of movement’, including ‘necessary field of vision’ and ‘permanent attention’ to their motoring in order to guarantee their own safety and that of other road users and their passengers.

They are obliged to be able to ‘maintain an adequate position’ at the wheel and to ensure their passengers also do so, and guarantee that ‘objects or animals being transported’ are placed so as not to interfere with the driver.

Benzema’s driving was found to have been materially affected by his broken finger and bandaged hand, meaning he could face a minimum penalty of three points off his licence and a €300 fine for ‘use of any device that diminishes permanent attention to motoring’, or as a maximum, six points and €600 for ‘dangerous driving’.

This will be the third time the Frenchman of Algerian origin has been caught committing a serious motoring offence in as many years.

But he is not the first top Spanish footballer to do so – in 2013, Iker Casillas was severely criticised for driving with his arm in plaster, and in the same year, Gerard Piqué was seen driving with his newborn son Milan – whose mother is the Colombian pop-rock legend Shakira – in his arms.