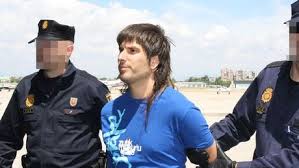 The former head of the political wing of Basque separatist group ETA, known as “Antza”, has returned to Spain a free man after completing his jail sentence in France, police said Wednesday.

Mikel Albizu Iriarte, alias “Antza”, was arrested in France in 2004 along with his partner and other accomplices after a major operation that was described by the Spanish government of the time as a historic blow against ETA.

“Antza” is the son of a founder of ETA, which is estimated to have killed 853 people in its decades-long campaign for Basque independence.

The group announced a permanent ceasefire in 2011 and formally disbanded last year.

“He arrived yesterday (Tuesday) in Spain from France,” a police source, who refused to be named, told AFP.

“As he has no cases pending in Spain’s courts, he is a free citizen.”

“Antza” was jailed in France in 2012 for 20 years along with his partner, Soledad Iparraguirre Guenetxea, alias “Anboto”, who was considered another former ETA leader.

The court in Paris ruled they would have to serve at least two-thirds of their sentence, or just over 13 years.

They were found guilty of theft, extortion and other crimes that allowed ETA to commit attacks.

But no deadly attacks were directly linked to the couple.