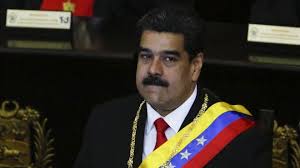 The European Union on Saturday warned beleaguered President Nicolas Maduro of Venezuela to call for re-elections within a span of eight days or otherwise, opposition candidate Juan Guaido, who announced himself as an interim President on January 23, would be recognised as the new President of the nation.

Al Jazeera quoted Spanish Prime Minister Pedro Sanchez as saying on a local television channel, “If within eight days there are no fair, free and transparent elections called in Venezuela, Spain will recognise Juan Guaido as Venezuelan President.”

Massive nation-wide protests took place last week, where Guaido swore himself in as the President to the cheering crowds, which came amid a deep economic crisis in Venezuela, with rising sentiments against the Maduro regime for economically strapping the country.

Reiterating the ultimatum given by Spain, French President Emmanuel Macron tweeted, “The Venezuelan people must be able to freely decide their future. Without elections announced in 8 days, we could recognize @jguaido as “President in charge” of Venezuela to implement this political process. We work together with our European allies.”

On a similar note, the Federal government of Germany in a statement issued on Saturday called for a quick resolution to the ongoing political crisis in the South American nation. The United Nations Security Council is also slated to hold a meeting on Saturday to discuss the issue.

The United States, Brazil, Argentina, and other countries have also recognised Guaido as the President, rejecting Maduro, who has been re-elected as the President of the South American country for the second time.