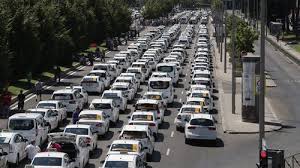 The taxi strike in Madrid has entered its eighth day, with drivers blocking a major thoroughfare and promising more action with help from colleagues coming in from other parts of Spain to support the protest against ride-hailing services like Uber and Cabify.
Riot police and tow trucks were sent in to clear Paseo de la Castellana, where parked cabs brought traffic to a standstill near Real Madrid’s Bernabéu stadium. Four people have been arrested.

Drivers in Barcelona ended their strike last week after the Catalan government offered new rules forcing customers to book ride-hailing services up to an hour in advance.