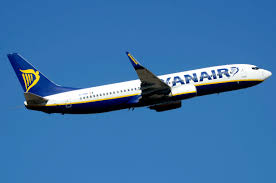 Ryanair says its cabin crew in Spain have voted in favor of a recognition agreement with two workers’ unions.
The Irish carrier suffered a number of strikes last year by pilots and cabin crew, forcing it to cancel hundreds of flights across Europe.
In a statement, Ryanair said they and the unions are working on a collective labor agreement which they both hope to conclude on or before April the 30th.
Cabin crew in Spain called off plans to strike on two days earlier this month after reaching an initial agreement on contracts.