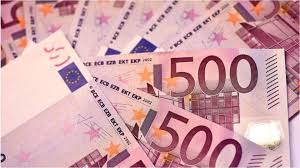 The bank of Spain officially stopped minting €500 notes yesterday (Sunday) in line with a decision taken by the European Union in May 2016, but those still in circulation remain legal tender.

They are expected to continue to be so indefinitely, and private individuals, shops, banks, offices, exchange bureaux and transport companies, among other entities, are still permitted to use the ones they have in their possession.

But everyone, professional or individual, is recommended to return any they still have to a high-street bank and swap them for notes of a lower denomination, or pay them into an account.

The European Central Bank (BCE) opted to stop producing €500 notes in light of increasing public concerns that they were largely being used for criminal activity, including corruption, financing terrorism, drug-dealing and human trafficking.

Also, individuals have long said just having one in their possession was extremely stressful, as it is a huge sum of money to misplace or drop on the pavement, and they feared these made them a greater target for thieves.

Whilst fairly commonplace in Spain until about a decade ago, the €500 note became widely known as the ‘Bin Laden’ across the Eurozone, since it was known that they existed, but they were practically never seen – at least, outside of Spain.

According to the Bank of Spain, the number of €500 notes minted and placed in circulation as at November 2018 was in region of 31 million, or €15.5 billion – a reduction on October’s 32 millon, or €16bn, and roughly the same as at its lowest levels of distribution, in February 2003.