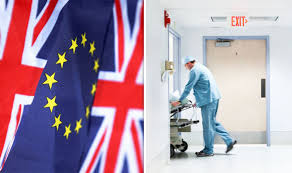 The British government has said that expatriate pensioners will lose access to healthcare payments if Britain leaves the EU without a deal in March.

Government sources said the NHS will no longer be able to cover health costs if Britain leaves the bloc without a deal on Friday March 29. Pensioners currently have access to NHS reimbursements for treatment under EU arrangements.

S1 certificates, which allow British pensioners and some workers living in the EU to access to healthcare, may also no longer be valid, the government said.

The NHS has also released information on what it expects to happen to healthcare for British travellers and working expatriates in Spain in the event of a no deal.

The Health Service said the access to healthcare was likely to change, with European Health Insurance Cards (EHICs) would be valid until the March 29 withdrawal date.

Government officials are attempting to strike deals on no-deal health arrangements, the NHS added. Health officials have called on expatriates to register with Spanish authorities to guarantee their access to doctors and cover themselves for a no-deal scenario.

The Convenio Especial ‘pay in’ health insurance scheme is set to be available to expatriates who have been registered with their town halls for more than a year.

The NHS also said British tourists could buy travel insurance to cover themselves if they holiday in the EU in the event of a no deal.

It comes as officials have called on expatriates in Spain and elsewhere to ensure they are properly registered as residents to protect against a no-deal scenario.