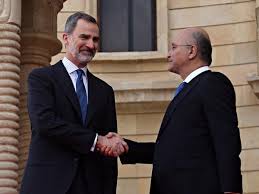 Spain’s King Felipe, who turns 51 today, has visited special forces in Iraq during the first trip by a Spanish monarch to the country in four decades.
Spain, which took part in the US-led 2003 invasion of Iraq that overthrew Saddam Hussein, went on to support Iraqi troops as they battled to roll back the so-called Islamic State group, which seized a third of the country including second city Mosul in 2014.
King Felipe is one of a series of leaders to visit Baghdad since the start of the year, including US President Donald Trump, who drew criticism for failing to meet a single Iraqi official, and last month took the decision to pull US troops from neighbouring Syria.