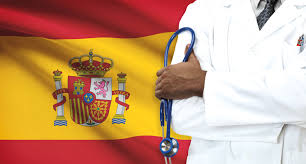 Insurers have attracted over one million new clients since 2013, and experts warn this could lead to a dual-speed system based on who can pay for quick assistance.

Growing numbers of people are taking out private health insurance in Spain. The figure has grown by over one million since 2013, after the government made cuts to public healthcare at the height of the economic crisis.

Today, one in every five households has private health insurance, at an annual average cost of €1,186, according to data from the National Statistics Institute (INE). The sector experienced a growth rate of 5.6% in 2018.

Some of these new customers turned to private health coverage after having bad experiences in the public healthcare system.

When her husband died in 2015 from an infection contracted during chemotherapy at a public hospital, Tina, 65, took the step. In 2012, a 41-year-old journalist named Pablo (an assumed name) decided he could not wait over four months to get a gastroscopy to check on his painful heartburn. And Amanda, a 36-year-old graphic designer, felt scared after she developed similar symptoms to the ones that killed her father of sudden cancer in 2017.

There are other, less dramatic reasons for taking the step: not being eligible for fertility treatments in the public healthcare system, or just because your company will pay for it.

In 2012, the Spanish government, then run by the Popular Party (PP), announced drastic cuts to public healthcare. With the economic crisis in full swing, the goal was to save close to €7.3 billion.

When investment in public healthcare began to falter, patient satisfaction with the system started to plunge as well, particularly as people were put on longer and longer waiting lists for all kinds of conditions.

Soon after that, private insurers began seeing a spike in new customers. By 2017, there were 11.5 million people on a private health plan, a 10% rise from 2013.

Sources in the private sector do not see a direct correlation between cuts to public healthcare and a rise in private coverage. “Most of us think we have excellent public healthcare,” says Ángela Milla, director of health at the insurer Axa. “Private insurance is a complementary model that brings added comfort and ease of choice.”

A spokesman for the insurer industry association Unespa says that the rise in clients is due to the fact that “companies and SMEs are offering them as a social benefit that is highly appreciated by employees. It is a tool to hold on to talent.”

Javier, an engineer with politically progressive ideas, started feeling stomach pains in the summer of 2013. Towards the end of the year he went to see the doctor. “They gave him an appointment with a specialist in mid-2015!” recalls his daughter Belén. “He was a great supporter of public healthcare, but he could not understand it.”

His condition deteriorated to the point where he was admitted into the emergency room of a large Madrid hospital, where he was diagnosed with a stomach cancer. “They gave him chemotherapy at the oncology department. It was dirty, and he developed a bacterial infection. Even the nurses encouraged us to take pictures and share them,” says Belén.

Belén shared images on Twitter of the filth build-up on the window sill, in the bathroom sink and on the shower floor inside the hospital room. “My mother Tina wanted to take him out of there, but he would say, ‘No, that’s what they want us to do by taking such poor care of everything, they want to drive us away.’”

In the end, Javier resigned himself to a transfer to a private clinic, where he passed away one month before the first specialist appointment he’d been given through the public system. “At that point, my mother took out a very comprehensive coverage for me and my sister,” explains Belén.

“The degradation of the public system, which is a PP strategy, leads people into dual coverage, to a private specialist that will let them skip the waiting list,” adds Marciano Sánchez Bayle, spokesman for the Federation of Associations for Public Health (FADSP). “Yet all surveys show that when people have a big health problem, they turn to the public system. And what nobody mentions is that companies deduct the insurance they take out for their workers, which means that in the end we are all funding private insurance.”

“We run the risk of creating two speed lanes in our access to health,” says Juan Oliva, a former president of the Association of the Health Economy who teaches at the University of Castilla-La Mancha. “A fast lane for those who have private insurance, and a slow lane for those who don’t. Public healthcare is a very solid institution, but if part of the population quits it, it will break and deteriorate.”

One of the most highly appreciated benefits of private insurance is quick access to appointments with sought-after specialists such as gynecologists and ophthalmologists. If they had a choice, 37% of Spaniards would go see a private specialist, according to Health Ministry figures. Surveys show that 74% of people with private coverage have gone to see a specialist in the last year, and half of them have undergone some kind of medical test. This percentage goes down significantly when it comes to seeing the family doctor or going to the emergency room.

Alberto, a Madrid engineer who felt abdominal pain, has already seen three specialists and undergone four tests since November. “Imagine how long that would have taken in the public system,” he notes.

There is no need to imagine. If he were a resident of the Canary Islands, he would wait 105 days on average, while in the Basque Country he would wait 22 days, according to the latest official data. Other regions are somewhere in between.

Amanda, the graphic designer, took out the private insurance offered by her company when she developed similar symptoms to her father, who died of a cancer with a genetic component. She went to see a specialist.

“As I was explaining the situation, he filled out forms to get me a gastroscopy and an intolerance test. He saw me twice until the treatment worked,” she recalls. Whether necessary or not, those tests made her feel better. She, like the others, was once a proud used of public healthcare. Until they weren’t anymore.