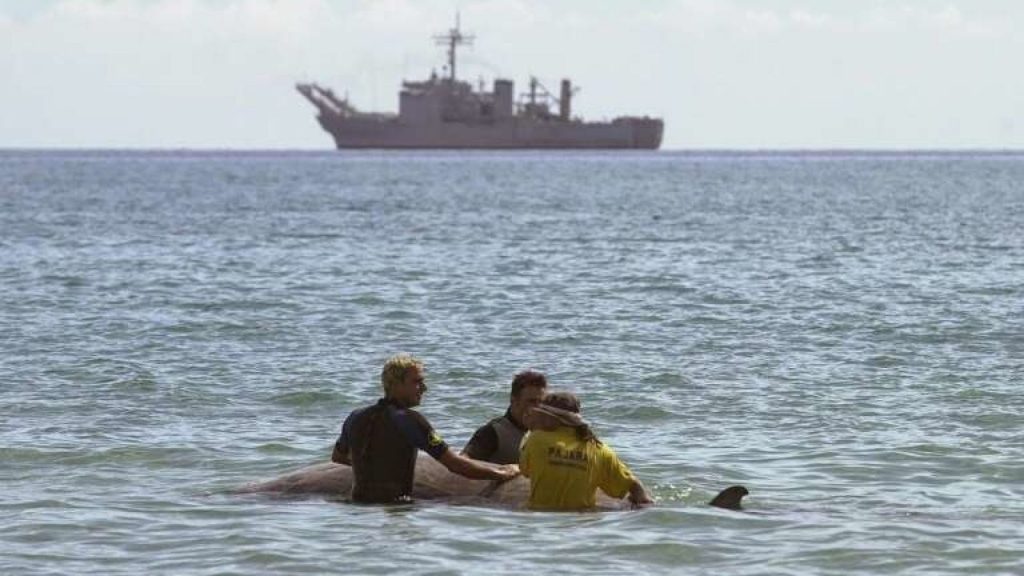 Beaked whales get the bends when loud warships terrify them, scientists have discovered.

Scientists have figured out why exposure to naval sonar drives beaked whales to beach themselves in bizarre bouts of apparently suicidal behaviour.

According to new research, the mammals are driven to suicide by the bends, also known as decompression sickness.

Just like when scuba divers suffer from it, nitrogen bubbles form in the whales’ bodies.

But instead of being caused by rising to the surface too quickly, the gas forms due to fear

“In the presence of sonar they are stressed and swim vigorously away from the sound source, changing their diving pattern,” explained lead author Yara Bernaldo de Quiros, a researcher at the University of Las Palmas de Gran Canaria in Spain.

“The stress response, in other words, overrides the diving response, which makes the animals accumulate nitrogen,” Dr Bernaldo de Quiros added in Proceedings of the Royal Society.

Academics are placing the blame on sonar developed in the 1950s to detect submarines, especially sonar buzzing at around five kilohertz as used by the US and NATO allies.

It was around the 1950s when the mass beachings of beaked whales began in the Mediterranean.

According to the researchers, there were 121 mass strandings between 1960 and 2004, at least 40 of which were closely linked to naval activities.

The so-called “atypical” mass strandings didn’t feature individuals or old and sick animals, but a handful or more of beaked whales washing ashore within a day and a few kilometres of each other.

During one NATO naval exercise in 2002, 14 whales were stranded over a 36-hour period in the Canary Islands.

“Within a few hours of the sonar being deployed, the animals started showing up on the beach,” Dr Bernaldo de Quiros said.

While these whales showed no outward sign of disease, inside their veins were filled with nitrogen gas bubbles and their brains had suffered severe haemorrhaging.

A study in 2003 led to the Spanish government prohibiting naval exercises near the Canary Islands in 2004.

“Up until then, the Canaries were a hotspot for this kind of ‘atypical’ strandings,” said Dr Bernaldo de Quiros. “Since the moratorium, none have occurred.”

The new study has called for similar bans to be extended to other areas where whales are known to congregate.