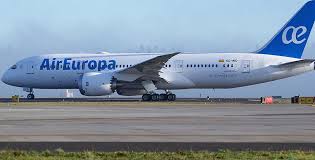 Pilots working for the Spanish carrier Air Europa have asked bosses not to force them to sleep over in Venezuela if they find themselves there when they finish their shifts, in light of escalating violence in the streets following a disputed government takeover.

The airline is one of the few European flight firms which still expects its crew, including cabin staff, to spend the night in Venezuela, which pilots’ union SEPLA says ‘puts their safety at risk’, both in their hotels and during the journeys between these and the airport.

In fact, Spain’s foreign office website advises against all but essential travel to the South American country since its leader Nicolás Maduro was overthrown by self-proclaimed president Juan Guaidó in what the former considers a coup d’état and the majority of Venezuelans have championed, hopeful of a return to freedom and democracy after years of what they describe as a dictatorship.

Iberia, Spain’s largest airline, is – like most others – continuing to operate its Venezuela routes, but pilots and cabin crew are taken straight to the Dominican Republic capital of Santo Domingo to stay the night without ever setting foot on Venezuelan soil.

But some Air Europa cabin crew and pilots have had to stay up to three nights in a row in Venezuela, where so far 40 members of the public have been killed in mass protests and where the now-ex leader Maduro has threatened military action, ordered his successor into house arrest and for his bank accounts to be frozen.

Air Europa pilots say the risk to their and their cabin crew colleagues’ safety in Venezuelan hotels and in transit between these and the airport is only part of what they are afraid of: if armed conflict commences, Venezuelan air-space would be closed, potentially leaving flight staff trapped in the country.

Several Latin American countries have officially recognised Juan Guaidó as new president of Venezuela – except Cuba, whose government supports Maduro – as has the USA, although Russia does not.

Spain was initially on the fence, preferring to follow whatever the European Union’s stance ended up being, although the EU appears to have effectively agreed to recognise Guaidó.

The EU has urged Guaidó to call a democratic national election, and Spanish president Pedro Sánchez has agreed.

But Sánchez has warned Maduro that if he uses violence, oppression or military conflict instead of holding a fair election, then Spain will announce its formal recognition of Guaidó as the country’s leader.