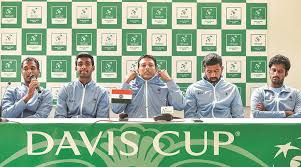 The Spanish Football league is to sponsor the new Davis Cup Finals, organised by a group founded by Barcelona defender Gerard Pique.
La Liga says it’ll promote the tennis competition through its international broadcasts in Europe, Asia, Africa, the US and Latin America.
The overhauled Davis Cup Finals will be played from Nov. 18-24th, with the first two editions taking place in Madrid.
The league is also sponsoring the Davis Cup qualifiers, which began today.