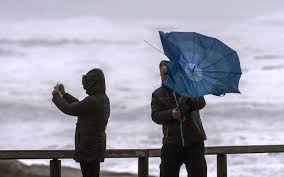 Gale-force winds, blizzards and snow-drifts brought by Hurricane Helena have led to weather warnings being issued for 44 provinces in Spain this weekend, and traffic authorities have advised everyone in the northern third of the mainland not to go out in their cars unless it is literally life or death.

Howling winds of around 100 kilometres per hour are forecast for tomorrow (Saturday) in the entire regions of Aragón, Navarra, Asturias, Castilla y León, the Balearic Islands, the Comunidad Valenciana, Catalunya, Murcia, Madrid and La Rioja, as well as the Andalucía provinces of Almería and Málaga, the Castilla-La Mancha provinces of Albacete, Cuenca and Guadalajara, and the province of Cáceres in Extremadura.

Gales of up to 132 kilometres per hour have already been reported in the whole of Galicia and its coastal provinces of A Coruña, Lugo and Pontevedra are likely to experience tidal waves.

These will also strike coastal areas of the regions of Asturias, Cantabria, the Basque Country, Catalunya, Andalucía, the Comunidad Valenciana, Murcia and the Balearic and Canary Islands.

Red and orange alerts for snow affect the regions of La Rioja, Madrid, Cantabria, all bar the south of Aragón, Castilla y León, Navarra, the Basque Country, the Galicia provinces of Lugo and Ourense, nd the Andalucía provinces of Jaén and Granada.

Pyrénéen provinces – Lleida (Catalunya), Huesca (Aragón) and the region of Navarra – are all on alert for possible avalanches.

Other than in the west of the mainland – where no changes are expected, day and night temperatures are predicted to fall across the country.

Frost and ice are forecast in inland parts of the northern half and eastern third of the mainland, being more intense in mountainous parts.

Thick layers of snow already cover some of Spain’s northern motorways – the A-15 in Navarra (pictured) and the A-6 in the province of León, which leads onto the AP-61, where snow-drifts blocked cars overnight this time last year – are said to have slowed to a halt or be inaccessible altogether.

The General Directorate of Traffic (DGT), part of the ministry of public works and head of Spain’s road-based transport management, has urged drivers in the northern half of the mainland to leave their cars at home on Saturday, and possibly on Sunday if conditions persist.

If driving is absolutely essential, those who decide to risk it should check whether any roads en route to their destination are shut, diverted or down to minimum speeds, and pack snow chains or winter tyres, as well as the usual precautions such as a fully-charged mobile phone, extra clothing and blankets, food and drink in case they become stuck.

Traffic restrictions, diversions and a ban on certain types of vehicles on specific roads may be last-minute depending upon how conditions evolve, in terms of snow and gales.