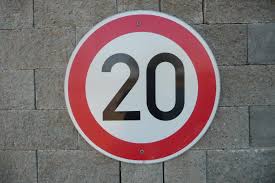 Motorists in built-up areas in Spain may be down to first gear permanently if the General Directorate of Traffic (DGT)’s plans go ahead – speed limits could be cut to just 20 kilometres per hour (12.5mph).

The road transport management authority has recommended many times that speeds in town centres should drop to 20 kilometres per hour, and it appears this is now about to be enshrined in legislation – a draft Royal Decree, or Bill of Law says this will be the maximum at which driving is permitted on roads where the pavement is on the same level and there is no kerb, a design growing in popularity in many urban hubs when roads are redeveloped.

Penalties for breaking the limit will become much stiffer – at the moment, the maximum is €300 in fines and a loss of two licence points, although ‘minor’ cases of speeding typically attract fines of €100, reducing to €50 if paid straight away.

Now, the maximum for speeding will rise to €500 and a loss of six licence points.

The DGT recalls that in 2017 – the most recent period for which statistics are available – a total of 509 people were killed in car accidents in town centres, mostly pedestrians, of whom 80% are considered ‘vulnerable’, such as the elderly or disabled.