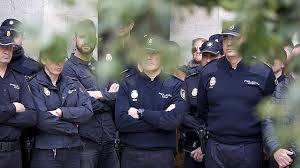 A reform of the controversial public safety legislation known colloquially as ‘the gagging law’ means taking photographs or videos of police officers only attracts a fine if the act of doing so puts them or other people at risk.

The law brought into force by the previous PP-led government meant filming or photographing police in the course of duty could lead to hefty fines, running into thousands of euros, on the grounds that it may compromise officers’ security.

These grounds have been successfully used to fine peaceful protesters, and Amnesty International warned Spain against its application since it meant in the event of police taking their authority too far – something they were accused of throughout the disputed independence referendum election day in Catalunya in October 2017 – victims would be unable to obtain proof and would be unlikely to achieve justice.

Cases of police officers ordering members of the public to delete pictures and videos, on pain of arrest, were not unknown.

Now, however, the new left-wing socialist government has stipulated that the officer in question must be able to demonstrate a clear risk to his or her personal safety or integrity, or that of his or her family.

Changes to the ‘gagging law’ are under discussion within a Parliamentary commission set up for the purpose, and are likely to include ‘undue’ use of uniforms, official symbols or replicas thereof, and growing hash plants in one’s own home, being reclassified as ‘minor’ offences rather than ‘serious’.

Generally, police turn a blind eye to a small number of cannabis plants being grown for decoration or personal consumption, but larger amounts will normally attract criminal action unless the grower is able to show clearly that he or she is doing so for own use.

And although the ‘serious offence’ description did not go so far as to arrest members of the public leaving fancy-dress parties in authentic-looking police uniforms, it would be difficult to demonstrate that their use was completely innocent.

It is also likely that, in answer to popular request, spontaneously convening protests and demonstrations will cease to be a criminal offence.

At the moment and based upon the previous government’s criteria, all demonstrations require written permission from the relevant provincial government or town or city council – who have the right to deny authorisation at any time without stating the reasons.

Without this, demonstrations that go ahead could lead to their organisers being fined between €30,000 and €600,000.

Yet animal cruelty or neglect only carries a fine of €100.

With the law change, protests are expected to require no more than four hours’ notice, and refusal by authorities may well have to be accompanied by a verifiable and sound reason.

For the amendments to go ahead, a majority vote from within the Parliamentary commission will be required.