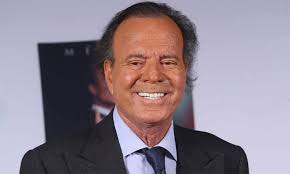 Legendary crooner Julio Iglesias has become the first Spaniard to win an honorary Grammy Award – and joins a list of timeless artists such as Elvis Presley and Freddy Mercury’s band Queen.

And ahead of his Lifetime Achievement Award due to be presented to him on Sunday, Julio – father of Miami-based pop sensation Enrique – has revealed some startling facts about himself.

Firstly, that he wanted to be a footballer, not a singer; secondly, that it was a car accident putting paid to his sporting career that led to his opting for a musical career.

Julio Iglesias is the top-selling Latin artist in history, and in his more than 50 years on the music scene, has achieved more than any other Spanish singer, according to the Grammy organisation.

“Spanish music has never had such an international impact for so long, and nobody can boast such a huge discography,” the Grammy press release says.

The Madrid-born star, who was once married to half-Philippine model and presenter Isabel Preysler – mother of Enrique and now wife of Peruvian Nobel novelist Mario Vargas Llosa – was left lying on his back and with very few hopes of ever being able to walk again after a car crash in 1962, when he was just 20.

His father’s assistant gave him a guitar to cheer him up, and he started composing songs during his long recovery and intense, painful physio, then moved to London to learn to speak English.

During his time in the UK capital, a young Julio sang now and again in the Air Port Pub.

But his musical career did not truly take off until July 17, 1968 when, aged 26, he won the International Song Festival in Benidorm with his own creation, La Vida Sigue Igual (‘Life goes on the same’), composed during his convalescence from the crash.

Barely eight years later, Julio would be on stage for the first time in Madison Square Garden in New York, breaking all box-office records with tickets selling out faster than for any other artist in history.

Once again, Julio would break records in Japan, in 1982 – then aged 40, he sold 1.2 million copies of his album De Niña a Mujer (‘From Little Girl to Woman’) and, with his eponymous 1987 album, became the first-ever artist to sell two million records in a language other than English in the USA.

A year later, the bilingual singer became the first artist to have his own special programme aired live in China, which was watched by 400 million viewers.

He has duetted with literally hundreds of other singers from all over the planet and in several languages – including Willie Nelson, Stevie Wonder, Diana Ross, Sting, Dolly Parton, Placido Domingo, Charles Aznavour and Johnny Hallyday.

Julio has won a string of Grammy and Latin Grammy Awards, Billboard Latin Music, World Music and ASCAP Awards, and has been granted medals and other decorations from governments from all over the globe.

In his native country, Julio has received the Gold Medal for Merit in Fine Arts and the Royal Order of Isabel the Catholic, and elsewhere, he has been decorated with the Légion d’Honneur in France, and with a star on the Walk of Fame in Hollywood, in Nagoya (Japan) and Rotterdam (The Netherlands) – and was the only foreign artist ever to win China’s Golden Record Award, the country’s highest musical distinction, as the best-selling non-Chinese musical performer in the country.