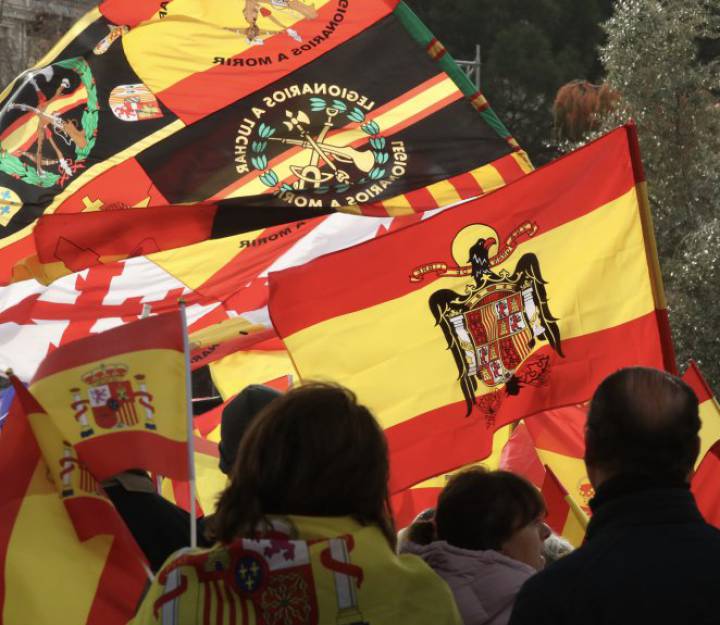 The conservative Popular Party, center-right Ciudadanos and far-right Vox called the demonstration in response to Pedro Sánchez’s handling of the Catalan independence drive.

The leaders of three of Spain’s right-wing parties managed to bring out tens of thousands of people on Sunday to Madrid’s central Colón square, to protest against Spanish Prime Minister Pedro Sánchez and demand that the Socialist Party (PSOE) politician call elections as soon as possible.

The conservative Popular Party (PP), center-right group Ciudadanos (Citizens) and far-right newcomer Vox attracted flag-waving crowds of 45,000 people, according to the central government delegate in the Spanish capital, although the organizers put the figure as high as 200,000.

e manifesto that had been agreed between the three groups accused the prime minister of having “betrayed” Spain by accepting 21 demands of pro-independence groups in the northeastern Spanish region of Catalonia. That is despite the fact that the central government last week broke off negotiations with the pro-secessionist groups due to their demands ahead of planned cross-party talks to address the issue of the ongoing independence drive.

The march comes two days before the beginning of a controversial and highly anticipated trial against the Catalan secessionist leaders who spearheaded the failed independence bid of 2017. The trial will open on Tuesday at Spain’s Supreme Court, which has called around 500 witnesses to the stand. The hearings are expected to stretch around three months, and leading witnesses will include former Prime Minister Mariano Rajoy, Barcelona Mayor Ada Colau, and Catalan parliament speaker Roger Torrent.

And that is not the only key date this week. On Wednesday, Spain’s Congress will hold a key vote on the 2019 budget blueprint, and failure to secure enough support could bring down Sánchez’s government and lead to early elections (see side box).

The Sunday protest in Madrid gave rise to a previously unseen image: the PP leader, Pablo Casado, the Ciudadanos chief, Albert Rivera, and the head of Vox, Santiago Abascal, posing together for a photo. That was an image that, until the weekend, Rivera had been trying to avoid, given some of the more controversial policies of Vox, which recently won a surprise victory in the Andalusian regional elections.

The call for the demonstrations was prompted last week by a political storm in Spain over the government’s decision to accept having an observer at the planned cross-party talks on Catalonia. It was unclear what this figure – who had been described as a cross between a rapporteur, a mediator and a notary – would have been tasked with doing at the talks, but the opposition said it was a concession to the Catalan separatists, who have repeatedly asked for international mediation.

Last Wednesday, the PP, Ciudadanos and Vox announced their plans for a street demonstration in Madrid to protest the move and “throw out” Prime Minister Pedro Sánchez, who came to power in late May after leading a successful no-confidence vote against Mariano Rajoy of the PP.

The demonstration went ahead despite Spain’s deputy prime minister, Carmen Calvo, announcing on Friday that talks with Catalan separatist parties were off, and that there will be no more proposals from Madrid.

“This government made a firm decision to build as many bridges as possible, but right now the framework we have created is not being accepted by the pro-independence parties,” said Calvo following the weekly Cabinet meeting on Friday.

On Sunday, demonstrators marched under the slogan “For a United Spain. Elections Now!” Protesters criticized the fact that Sánchez has refused to call elections in the eight months he has been in power. “We need to kick out the squatter in La Moncloa,” said Vox leader Abascal, alluding to the seat of government in Madrid. Given that Sánchez came to power via a no-confidence motion, and that the PSOE commands just 84 seats in Congress, where 176 votes are needed for a majority in the 350-seat house, “squatter” is a term regularly used against him by the opposition.

Vox, a party that currently has no representatives in Congress, managed on Sunday to literally position itself on a level with the PP, a party that has governed Spain for nearly 15 years, and with another, Ciudadanos, that counts on 32 seats in Congress.

For Casado, there were calls from many of the attendees at Sunday’s protest to file his own motion of no confidence against Sánchez. But the PP does not currently count on the support in Congress for such a move, and what was clear from yesterday’s demonstration is that the conservative party now has to share a stage with Vox and Ciudadanos if it wants to oust Sánchez from power.

The PP needed the support of both these parties in order to form a government in Andalusia after the December regional elections, which saw the PSOE win most votes but fall short of the majority. Andalusian voters gave 12 seats to Vox on the strength of it anti-immigration rhetoric, and the PP was forced to accept some of its demands on education and family issues. With local and regional elections coming up in late May, Vox could make new inroads in councils and assemblies across Spain.

The PP and Ciudadanos agreed that there would be no political speeches made by the party leaders on Sunday, in a bid to keep Vox out of the spotlight. Instead, a trio of journalists read out the manifesto that had been agreed on by the three parties. The text was resonant of the tough rhetoric that has been employed recently by Casado and Abascal, and was in contrast to the discourse of Ciudadanos.

The three leaders did address the crowds ahead of the protest, however, with the Ciudadanos chief speaking about a “wave of dignity.” The manifesto denounced the alleged “suicidal drift” of Sánchez, accusing him of having “betrayed” Spain with a “stab in the back” by having “accepted the 21 demands of the pro-secessionists,” in allusion to a list of requests put together by regional chief Quim Torra ahead of planned cross-party talks. But the central government has not recognized, among other points on that list, “the right to self-determination in Catalonia,” nor has it allowed for an “international mediator.” And, of course, it broke off negotiations on Friday with the pro-independence parties.

The PP also utilized the same language as Vox, speaking about a “reconquista,” or reconquest. “Sánchez’s time is over,” Casado said on arrival in Colón. “There is no more room for Socialist surrender nor more pro-independence blackmail. Today sees the start of the reconquest.” Abascal, who was received to cries of “Prime minister, prime minister!”, stated that the “coup d’etat” in Catalonia should be “suffocated to the very end.”