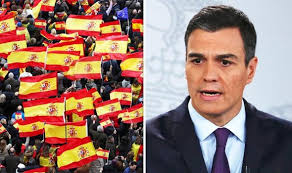 Far-right lawmakers are set to be elected to Spain’s parliament for the first time in nearly four decades, two opinion polls showed on Saturday, forecasting that no single party would get a majority in a snap election on April 28.

Spain’s Socialists, who were in power since June with a minority government, are set to gain more seats than any other party but fall well short of a majority, the surveys showed.

Prime Minister Pedro Sanchez called the early election on Friday after Catalan pro-independence parties who had previously backed him joined opposition parties in defeating his 2019 budget bill this week.

The far-right party Vox would win up to 46 seats out of 350, according to a GESOP poll published by El Periodico newspaper, while the GAD3 polling firm for La Vanguardia newspaper forecast 16 seats.

Vox is a newcomer on the Spanish political scene and pollsters had underestimated its score in a regional election in Andalucia in December, where the anti-immigration party won 12 seats.

Memories of the dictatorship of Francisco Franco, who died in 1975, meant Spain had long been been immune to the growing popularity of far-right party in much of Europe.

The polls show a fragmented political landscape in which the political identity of the next government is yet unclear.

Sanchez’s Socialist Party would win 115-117 seats in the election, according to the GESOP poll. The conservative Popular Party would get 75-77 seats.

With such an outcome, one of the two main parties would need the support of at least another party to secure a majority.

The centre-right Ciudadanos would win 44-47 seats, in a tight race with Vox to be the third-largest party.

The polls are the first published since elections were called.