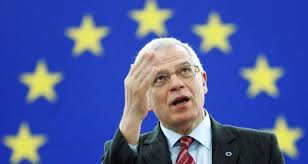 The European Union will not agree to renegotiate the deal on Britain’s exit from the bloc but there might be some margin of manoeuvre for a statement on the Irish backstop, a Spanish foreign ministry source told Reuters.

The comment came after Bloomberg quoted Spanish Foreign Ministry Josep Borrell as saying a revised Brexit accord was being hammered out, a comment that pushed up the pound.

“There could be some margin for some kind of political agreement around the Irish backstop, but we do not know how it can materialise, whether in a letter, a declaration or an asterisk,” the source said.

“The Brexit Treaty is not going to be reopened,” the source added, referring to the Withdrawal Agreement reached between Prime Minister Theresa May and the EU last November.

The British parliament rejected that accord in January mainly over the Irish border ‘backstop’, an insurance policy designed to avoid border controls between EU member Ireland and British-ruled Northern Ireland after Brexit.

Some British lawmakers fear the backstop could keep Britain trapped indefinitely in a customs union with the EU.

Britain is due to leave the EU on March 29. May was in Brussels on Wednesday for more talks with the head of the European Commission, Jean-Claude Juncker.