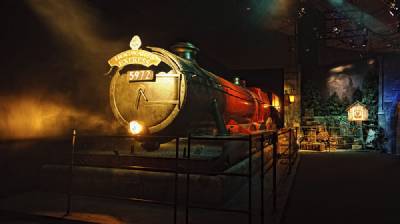 Harry Potter fans, take note: The official exhibition, which has spent the last decade touring the globe, is back in Spain – this time in Valencia.

The country’s third-largest city will host the entire props of all seven films based upon J. K. Rowling’s best-selling series of novels – the ones which turned her from a 25-year-old single mum living below the breadline where being 2p short for a tin of baked beans was a crisis, through to the first author in history to become a billionaire in US dollars.

Jo, as she is known to her friends, did not stay in the billionaire bracket for long; Forbes knocked her off its rich list when she lost this ‘status’ after giving away over US$160 million to various charities.

At 28, divorced from her Portuguese husband and having moved back to Edinburgh with her one-year-old daughter after three years in Oporto, jobless and broke, a near-suicidal Jo called herself ‘a total failure’.

Long before she hit 40, though, the Gloucestershire-born French and Classics graduate would have turned her life around in a way that few would dare dream of, and entirely thanks to her own imagination.

The fruits of the fantasy world she created and which first hit bookstore shelves in the UK 22 years ago will soon be part of an interactive and lifelike gigantic display at the City of Arts and Sciences in Valencia, a futuristic complex often compared favourably with the Sydney Opera House and one of the first and most iconic sites visitors will see from the air as they come in to land at the city’s airport.

Just as 11-year-old Harry did after he escaped his life in a Surrey broom cupboard, boarded the train at Platform 9-and-three-quarters and stepped into the hall at Hogwarts’ school for witches and wizards, visitors to the exhibition will try on the ‘sorting hat’ at the entrance to figure out which house they should be in. But unlike in the books, only two houses, rather than four, are on the menu at the exhibition: the virtuous and resourceful Gryffindor, Harry’s own, or the dark and sinister Slytherin, run by Professor Severus Snape – played in the film series by the late British actor Alan Rickman.

Snape runs the potions class, which visitors can join in to see if they fare as well as Harry’s high-IQ friend Hermione Granger, a ‘mud-blood’ (mixed wizard and ‘muggle’, or non-wizard) whom J. K. Rowling based upon herself when creating her on paper.

Harry excelled in Quidditch at Hogwarts’ – a game that has since become a real-live sport (albeit with some adaptations based upon the limitations of the ‘muggle’ world) – as the ‘seeker’, whose job it is to catch the ‘golden snitch’, a flying ball which buzzes around the pitch during this somewhat rough-and-tumble version of lacrosse on floating broomsticks. Visitors to the exhibition can pop into the Quidditch area and have a go at hurling the ‘quaffle’, the main ball of the match, to see whether they would make the school’s team.

You can also take a Herbology class, one of Harry’s, Hermione’s and their friend Ron Weasley’s core subjects, during which you’ll be able to pull up a mandragora from a plant pot – a shrub with a root that looks like a baby and whose tears can be fatal.

Outside of class, the three magical kids would spend a great deal of their spare time in the hut occupied by the half-giant Hagrid, played in the film series by Robbie Coltrane, who owns a massive, snarling, three-headed pitbull called Fluffy.

Exhibition visitors can also take a tour of Hagrid’s hut – as well as the Gryffindor common room and dormitory, and the Forbidden Forest which Harry and his friends ill-advisedly stray into more than once.

The costume department contains original examples of all the outfits worn in the film series, including those by the ‘fantastic beasts’ which burst onto the scene out of J.K. Rowling’s head over the decade during which the seven novels were gradually published and sold out within minutes of reaching the shelves.

Original props you can view in person include the ‘golden snitch’, the ‘quaffle’, the magazine Seeker Weekly which all Quidditch fans in the series read religiously, and Harry Potter’s nemesis Draco Malfoy’s top-of-the-range Nimbus 2000 broomstick, the newest and most expensive in the school that made the spoilt Slytherin student the envy of all his classmates.

For those of you still reeling from the news that the national sport of the wizarding community actually exists in real life, you might need to sit down and pinch yourself about the next fun Quidditch fact: exactly three years ago, on February 8, Spain hosted the first-ever Quidditch Copa de España, or ‘Spain Cup’, which was won by the Madrid Wolves –  seen in the picture taken by reporter Carlota Chiarroni from her Twitter site, @cchiarroni.

The eight teams, from Galicia, Madrid, the Basque Country and Andalucía, were competing for just two places in the European Quidditch Cup in Italy in April 2017, and it was the Bizkaia Boggarts who joined the Wolves on this prestigious trip.

Although this fantasy sport started out life in the muggle world in the USA in 2005, it was the Wolves’ founder Itziar who brought it to Spain after she fell in love with the game as a 12-year-old Potter fan.

“People ask us if we really fly. Of course we don’t!” Itziar laughs.

But it’s natural to wonder how ‘muggle Quidditch’ differs from lacrosse, given that the main difference is the flying broomsticks.

It’s not easy, the Wolves say. Instead of brooms, they use PVC poles, which they hold between their legs like broomsticks throughout the game as they run round the pitch – quite a challenge when you’re trying to net a ‘quaffle’ into the goal, a raised ring, at the right end of the ground.

And it’s not a game for the easily-bruised, either: all the rambunctious action of the Hogwarts’ version is played out in the ‘muggle’ version – and some of Spain’s top players started out in the relatively rough sports of rugby and handball, which have a few similarities with Quidditch.

Neither were all of them Harry Potter nuts before they started: one of the team managers, Miguel Vázquez, learned about the sport from a friend, thought it was a bit geeky, but discovered it was very physical and very much a ‘contact’ game; and it was not until he was already learning to play that he found out where Quidditch came from and who invented it.

“Rugby tends to be more dynamic, but the fact that there are four balls in movement spread out across the pitch with players interacting simultaneously makes Quidditch far more entertaining,” Vázquez admits.

Quidditch’s oldest team in Spain, from 2012, was the Madrid Lynx, but it soon expanded, with the arrival of the Barcelona Eagles and the Catalunya Quidditch Association set up to allow these to compete in European tournaments – in which the UK’s presence, with over 40 official teams, is huge.

Canada, Australia, the US and many other European countries also have a string of world-class Quidditch teams.

‘Writing about what you know’ is, in practice, all an author can do – and even where a novel clearly has no autobiographical slant, it is often the case that inspiration taken from the writer’s real life finds its way into characters or scenes.

The terrifying Dementors plaguing Harry in book three, the Prisoner of Azkaban, permanently suck out the souls of muggles and wizards, turning them into living zombies – and J.K. Rowling is said to have created these as a personification of her clinical depression which she suffered after splitting from first husband Jorge Arantes and having to go on benefits so she and her toddler, Jessica, could survive.

Harry’s Uncle Vernon is described by Catherine Lockerbie in a 2000 edition of The Scotsman as ‘a grotesque philistine of violent tendencies and remarkably little brain’, and the right-wing British tabloid he reads in the novel series is one J.K. Rowling is particularly against.

A flying turquoise Ford Anglia in the second novel, The Chamber of Secrets, was inspired by a car of the same make and model owned by her best friend from sixth form, Sean Harris.

It is said that Hogwarts’ headmaster, Albus Dumbledore, is loosely based on his counterpart at Jo Rowling’s childhood school, St Michael’s, Alfred Dunn.

And it is believed that Platform 9-and-three-quarters being at London’s King’s Cross Station was picked because it was where J.K. Rowling’s parents first met, a year before she was born.

The exhibition: What you need to know

Having already aired in Madrid – where twins Oliver and James Phelps, who played Ron’s brothers Fred and George Weasley in the films, cut the red tape and met fans at the gate – the world of Harry and friends opens in Valencia on Saturday, April 13 and is expected to remain there until July.

Tickets can be bought online via the official website, Harrypotterexhibition.com – ‘family packs’ for two adults and two or three children work out at an average of €16.90 a head, or adults and teenagers over 12 pay €21 each.

The City of Arts and Sciences (Ciudad de las Artes y las Ciencias) does not have a metro station on the doorstep – the nearest is Alameda, which is a 15-minute walk. A better method is by local bus – head for the coach station on the banks of the old river Túria, now the botanical gardens, and take number 95; for the return, take one of the 13, 14, 15, 19, 35, 40 or 95 back into the city centre.

Even better if you have access to a car – from the AP-7 motorway, take the V-31 signposted Valencia/Puerto, passing Catarroja and Sedaví before it becomes the V-30, then at the large roundabout near La Fe hospital, take the first exit onto the C/ Antonio Ferrandis. Finally, at the next roundabout, take the third exit onto the C/ Eduardo Primo Yúfera, and the spectacular complex is about 700 metres in front of you.