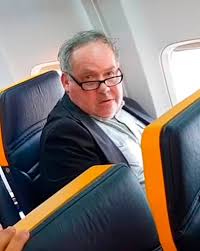 Essex police conclude their inquiry into incident that was filmed and put on social media.

The man who launched a tirade of racist abuse at a 77-year-old woman on a Ryanair flight last October has avoided charges in the UK after the Crown Prosecution Service said the offence took place under Spanish jurisdiction.

David Mesher, from Yardley Wood, Birmingham, was filmed by fellow passengers calling Delsie Gayle an “ugly black bastard” and told her “don’t speak to me in a foreign language, you stupid ugly cow” on a stationary plane at Barcelona airport on 19 October.

The footage went viral on social media and Mesher publicly apologised a week after the incident, claiming that “I probably lost my temper a bit” after he had asked Gayle to move from her seat.

“I’m not a racist person by any means and it’s just a fit of temper at the time, I think,” Mesher said. “I apologise for all the distress you’ve had there and since.”

Gayle rejected his apology, saying: “You must forget and forgive but it’s going to take a long time for me to get over what he has done to me.”

Ryanair reported the incident to Essex police on 21 October, providing the force with a copy of the video and the details of the passengers involved. The airline was criticised for not informing police immediately, and for moving Gayle away from her seat rather than reseating Mesher.

Mesher, 70, was subsequently questioned by West Midlands police at the sheltered accommodation where he lives.

In a statement released on Monday, Essex police said they had completed a “thorough investigation” of the incident and sought advice from the Crown Prosecution Service. “They did not have the jurisdiction to advise on any charging decision,” the force said.

It added: “We are now in contact with the Spanish legal authorities so that they can determine how they wish to proceed.”