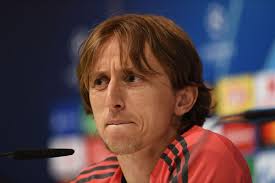 Real, chasing a fourth European title in a row, host Ajax in the second leg of their Champions League last-16 tie on Tuesday having won 2-1 in Amsterdam.

But they come into the game on the back of three consecutive home defeats – including two by Barcelona last week.

“Given what he did for us and this club, we miss Cristiano,” said Modric.

Ronaldo was top scorer, or joint top scorer, in the past six Champions League seasons. He scored a club record 450 goals in nine years before his £99m summer move to Juventus.

But they failed to sign a big-money replacement and only three of their players have scored more than five goals this season – Karim Benzema (20), out-of-favour Gareth Bale (13) and centre-back Sergio Ramos (11).

They have lost three of their last four games, 2-1 to Girona, 3-0 to Barcelona in the Spanish Cup semi-final second leg and 1-0 to Barca in La Liga to leave them 12 points off top.

“The club wanted the other players to make up for what Ronaldo did, divided between the strikers and that is not easy,” Modric said.

“Cristiano scored 50 goals and you can’t find someone today who scores that many. Some of us have to take a step forward and, while not scoring 50, what we need is two or three players who score 15, 20, or 10 goals and we don’t have that.

“That is our biggest problem this year. For example against Barca in the cup we had many chances and when you don’t take advantage your opponent punishes you.”

Real captain Ramos starts a two-game ban for “for clearly receiving a yellow card on purpose” during the first leg – which the Spanish side were fortunate to win, while midfielder Marcos Llorente is injured.

Could Mourinho return to Real?

Mourinho said he would “have no problem at all” returning to an old side, adding: “It’s really a reason of pride when a club where you worked before wants you back.”

Mourinho, who managed Real from 2010 to 2013, had been working as a pundit on Bein Sports reviewing Real’s El Clasico defeat by Barcelona on Saturday

“Return to a club that I have been before?” said Mourinho, who had two spells at Chelsea. “If I think the right club, the right structure, the right ambitions, I will have no problem at all.”

He had been linked to the job when Solari replaced Julen Lopetegui in November, but he was Manchester United boss at the time and was sacked the following month.

‘Ramos a mental loss for Real’

Ajax head coach Erik ten Hag says the absence of Real captain Ramos could benefit his side, as the Dutch giants look to reach the last eight for the first time since 2003.

“I think he is the boss on the pitch and in the backline,” he said. “Him being absent is not only a tactical loss for them but also a mental one.

“Our goal is clear and is the same for every game – scoring goals. This is Ajax, and we don’t care about who we play, our intention will always be the same – dominate, score goals and win.

“We always have the intention to take the initiative. That’s our style of playing football.

“For Real Madrid, this is the last chance to win something. We are still active on three fronts and our players are so ambitious they will try to win the three competitions.”