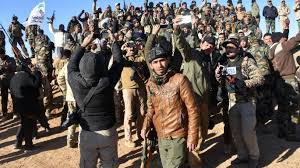 Spanish agents in Syria are cooperating with Operation Gallant Phoenix, a U.S.-led effort to identify fighters from Western nations who have joined Islamic State (ISIS) and Al Qaeda-affiliated groups in the region, say counter-terrorism sources.

The Spanish Interior Ministry believes there are 130 jihadists who are either Spanish citizens or residents and who remain in conflict areas, out of a total of 237 who have traveled to the region. The ministry recently launched a new counter-terrorism strategy that underscored the risk posed by returning fighters.

Spanish participation in Operation Gallant Phoenix is not new, but its relevance has grown after US President Donald Trump issued an ultimatum in mid-February urging European countries to take back the more than 800 foreign jihadists captured in Syria and held by Kurdish forces.

Europol and secret services from several European countries are cooperating in an operation launched by the US to identify jihadists leaving combat zones. But so far, no European nation had formally admitted to this cooperation.

The goal of the operation is to collect all kinds of evidence – from DNA samples to fingerprints, photographs, documents and electronic files – from territory once held by the so-called Caliphate. This evidence helps identify terrorists who have returned to Europe and the US, and also those who are being held in Syria and Iraq.

According to Europol, at least 5,000 European citizens have traveled to both those countries since 2014, and even though many of them have died in combat or in attacks, the survivors who make it back home tend to be even more radicalized than they were when they left. On the one hand, they have experience handling weapons and explosives; on the other, they are viewed as heroes, and this makes them powerful instruments of radicalization, according to Spanish counter-terrorism experts.

Returning fighters have become a major source of concern for European governments. Spain recently approved a new National Counter-Terrorism Strategy that focuses on these individuals. The new guidelines contemplate prison for returning fighters to minimize the risk that they pose. But the only charge that can be brought against them is associating with a terrorist group.

The new strategy proposes incorporating evidence obtained in conflict zones in order to charge these individuals with specific terrorist crimes committed abroad. Although this possibility is contemplated by Spanish legislation, it has not been applied because of the difficulty of obtaining legally acceptable evidence, said sources at the Interior Ministry.

This gives added meaning to the information-gathering effort made by officers on the ground in Syria and relayed to CITCO, the Intelligence Center Against Terrorism and Organized Crime. This agency answers to the Interior Ministry and receives assistance from the National Police, Civil Guard, regional law enforcement agencies and the national intelligence center CNI.

Although the number of fighters leaving Spain for conflict zones is significantly lower than in other European countries, the latest statistics suggest a constant trickle. The latest count by CITCO in mid-January showed that 237 jihadists who are either Spanish nationals or residents had gone to Syria, Iraq, and to a lesser extent Mali and the Philippines. Of these, 130 remain there and 61 are believed to be dead, many of them in suicide attacks. Another 21 have returned to Spain, and 12 of these have been jailed. Another 24 have gone on to different European countries, where eight have been placed behind bars. Authorities have lost track of one individual.

Most of these individuals are men, and 80% are foreign nationals – mainly Moroccans – who were living in Spain before joining ISIS and Al Qaeda-affiliated groups.

A second source of concern for the Interior Ministry are the jailed jihadists. According to prison authorities, there are 139 individuals behind bars for jihadist terrorism. This is three times as many as in 2012. And then there are the petty criminals who are becoming radicalized. The Interior Ministry has identified 49 inmates who are in this category and who additionally perform recruitment work, and another 81 who show signs of harboring increasingly radical ideas.

In the last six months, the Civil Guard and National Police have broken up two networks that were operating inside Spanish prisons, where their job was to radicalize Muslim prisoners in jail for ordinary crimes. The latest raid, conducted in February, brought down a network inside Madrid’s Valdemoro penitentiary, where the ringleader Suleimán E. M. was offering between €500,000 and €1 million to any prisoner willing to commit suicide attacks after their release from prison. It is the same amount that ISIS gives the families of terrorists who commit suicide in Syria. The funds came from international drug trafficking, according to the investigation.

Counter-terrorism experts also warn that most of the recent attacks on European soil were perpetrated by people who were radicalized in their own home setting. This was the case with the August 2017 attacks in Barcelona and Cambrils.