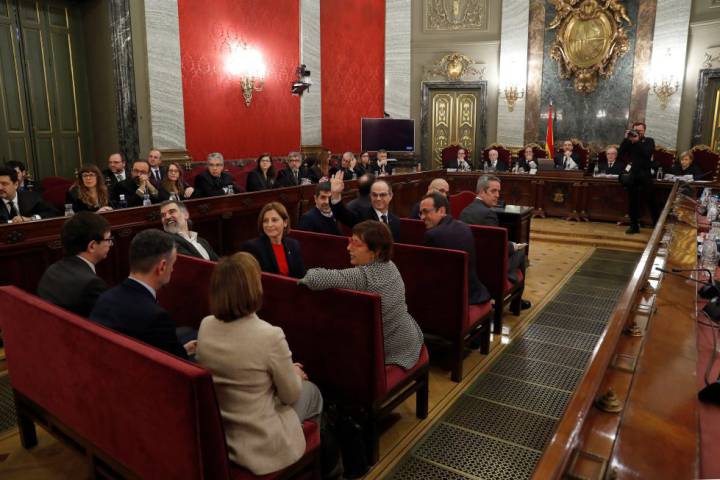 Tens of thousands of people, including the premier Quim Torra, filled the Spanish capital with signs and flags

Tens of thousands of people marched in Madrid on Saturday in favor of Catalan self-determination and to demand the release of politicians and civil society leaders who are on trial for the unilateral secession attempt of late 2017.

The march started out at Atocha train station and ended at Cibeles square, filling downtown Madrid with esteladas – the unofficial flag used by supporters of independence – and cries of “This trial is a farce!” and “Freedom!.”

It was a very different sight from another march that took place only 850 meters from here five weeks ago, when the conservative Popular Party (PP), Ciudadanos (Citizens) and the far-right Vox organized a pro-unity demonstration in Plaza de Colón.

Catalan premier Quim Torra and many members of his administration headed a march that was organized by around 60 associations, including the large pro-independence groups ANC and Omnium Cultural, whose leaders are currently on trial for their role in the secession bid.

“We’ve come to say goodbye,” cried out hundreds of demonstrators as they made their way through the heart of the Spanish capital after arriving in 500 buses and 15 high-speed AVE trains.

Attendance figures varied wildly: ANC, one of the organizers, claimed there were 120,000 demonstrators, while the National Police said it was closer to 18,000. By this newspaper’s estimates, there were around 55,000 protesters.

“We’re normally on stand-by, but as soon as we’re told to go out on the street, we go out on the street,” said Roser Borrell, 65, a butcher from Miravet de Ebro (Tarragona) who took an AVE train to Madrid with several friends. One of them, Pilar Ripoll, 70, says that she lives on a pension of €600 a month and that she is spending “€300 to come to Spain. And nobody is paying for me. We don’t go on vacation, we save up the money for the demonstrations.”

“The good people are in jail, they’re the only decent politicians,” added Borrell. One of these, Oriol Junqueras, who is the leader of the Catalan Republican Party (ERC), is running as a candidate in the snap general election that Spain will be holding on April 28, despite facing years in prison if found guilty of rebellion.

Former Catalan premier Carles Puigdemont, who fled to Belgium shortly after the independence declaration of October 27, 2017, has charted out a course with a view to the national election and the political term that follows. At a recent congress of his Catalan European Democratic Party (PdeCAT), the former premier imposed his views on the more pragmatic sector of the party.

Last week, the former chief of the Catalan police force, Josep Lluís Trapero, gave witness testimony at the trial and revealed that he had warned Puigdemont about the risk of violence if he went ahead with the unauthorized referendum of October 1, 2017. Trapero also said that the Mossos d’Esquadra had stood ready to arrest Puigdemont and his aides if ordered to do so by a judge.