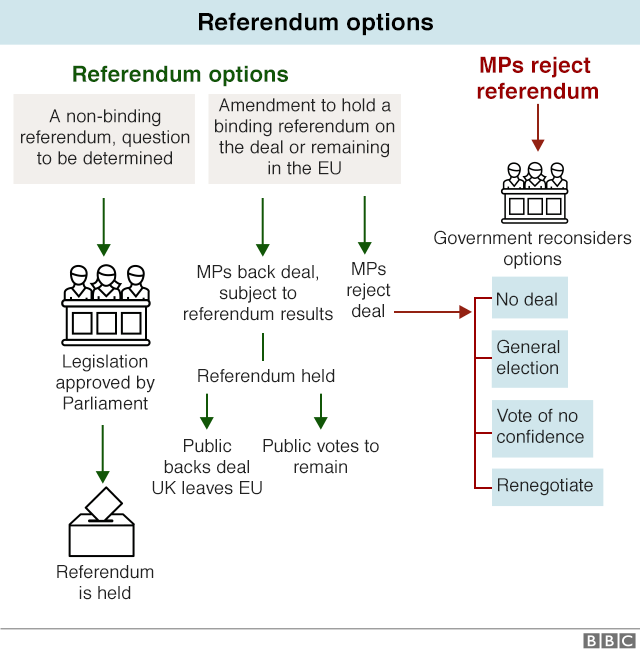 MPs have twice rejected Theresa May’s Brexit deal. They have also voted against leaving with no deal, and voted in favour of a delay.

Now MPs have backed a delay, Theresa May has to request an extension to Article 50 from the EU.

Assuming the other member states all agreed, Brexit would be postponed. Theresa May has said this should be for no longer than three months. But she has also raised the prospect of a much longer extension if MPs won’t back her deal.

There are still plenty of possible outcomes.

Voting to delay Brexit would not mean that leaving the EU without a deal was ruled out forever.

If the EU won’t grant a delay, or if the UK and the EU cannot sign off a deal during any extension, then this would still be the default outcome.

So although a majority of MPs have repeatedly indicated they are against no deal they would need to do something else to prevent it from happening as a matter of course.

Theresa May could have another go at getting her deal through the House of Commons.

The government had planned to hold another vote before the EU summit on 21 March. If it had passed the prime minister would then have requested the short extension she prefers.

But on 18 March the Speaker made a statement in the Commons arguing that there couldn’t just be a rerun of the vote on 12 March. There would either have to be changes to the deal or MPs would have to be asked to consider a different question.

There is a rule that the House of Commons should not be asked to vote twice on exactly the same question during a single parliamentary session.

It is up to the Speaker to decide whether to allow any vote.

If MPs do get to vote again at some point, and back the deal at the third time of asking, legislation would be introduced to bring it into effect with a new Brexit date.

If there is a longer extension, the government could propose to negotiate a completely new Brexit deal – possibly after Parliament has had a chance to express its view about alternative deals.

Instead, there could be a complete renegotiation that would take some time.

The government could pivot towards one of the other models of deal that has been suggested – perhaps something close to the so-called “Norway model” which would involve a closer relationship with the EU than the current deal proposes.

It could have the same status as the 2016 referendum, which was legally non-binding and advisory – in common with past UK referendums. But some MPs want to hold a binding referendum where the result would automatically take effect.

Theresa May could decide the best way out of the deadlock would be to hold an early general election – in order to get a political mandate for her deal.

Labour could table another motion of no confidence in the government at any time.

However, any delay to Brexit would certainly lead to questions about whether the ultimate destination was going to be a reversal of the 2016 referendum.

After Theresa May survived a challenge to her leadership, the Conservative Party’s rules mean she won’t face another for 12 months.

But she could always decide to resign anyway, if she can’t get her deal through and she’s not prepared to change course.