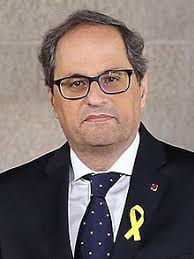 Prosecutors in Spain are bringing charges of disobedience against Catalan regional president Quim Torra after he allegedly failed to comply with orders from the country’s electoral board.

Prosecutors said in a statement Wednesday the charges relate to Torra’s alleged failure to remove eye-catching pro-independence symbols from the regional government’s headquarters in Barcelona before Spain’s April 28 general election.

The electoral board deemed the yellow ribbon symbols to be an unacceptable ‘tool of political propaganda.’ Elected officials and public institutions are prohibited from expressing support for one particular party or ideological position during a campaign period.

Torra argued it was a matter of free speech and requested a postponement of the deadline to remove the symbols.

A judge will assess the prosecutors’ evidence before deciding whether to go to trial.