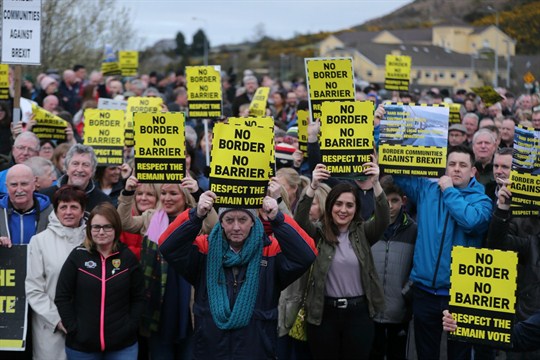 The chances of a no-deal Brexit are rising, with Prime Minister Boris Johnson pledging to leave the EU on 31 October, with or without a deal.

Mr Johnson wants a new withdrawal deal that removes the backstop (the clause that stops there being physical checks on the Irish border under any circumstances).

But EU negotiators say there is currently no basis for “meaningful discussions” with the UK.

The UK and Irish governments and the EU have been consistent that, whatever happens, there will be no physical checks at the Irish border.

But keeping that promise could be challenging.

If the UK leaves without a deal, it will cease to have a trade deal with the EU, becoming what is known as a “third country”.

The EU imposes a range of checks at its borders for countries like this.

There are customs checks, like those on the Norway-Sweden border, and product standard checks.

The checks on food products are strict – they must take place at border inspection posts located “in the immediate vicinity of the point of entry” into the EU.

The EU says these border checks are necessary to protect what it refers to as the “integrity” of its single market and customs union.

Essentially, it means that the EU wants to prevent products entering its market that could be unsafe or represent unfair competition.

The EU’s chief negotiator Michel Barnier has repeatedly emphasised that protecting the single market is a key objective for the EU.

What has the EU said?

The EU has made it increasingly clear that in the event of no deal there would have to be some form of checks on cross-border trade in Ireland – but the question is how and where would they take place?

“We have to implement everywhere, at each and every external border of the EU, three types of controls”, to protect consumers, businesses and national budgets, Mr Barnier said.

“We need to find the way somewhere to implement the checks. We’re working with the Irish government to know where we can apply these checks.”

That has also been echoed by the Irish government in its latest contingency plan.

It said no deal would mean cross-border trade could not be as frictionless as it is today.

The plan said new checks will be “necessary to preserve Ireland’s full participation in the single market and customs union”.

But it does not elaborate on where and how such checks would take place.

What checks could happen away from the border?

The Revenue Commissioners, Ireland’s tax authority, has suggested that while all customs declarations could be filed electronically, up to 8% of consignments would still need to be physically checked for customs purposes.

It says it is exploring ways of doing this at traders’ premises or at designated warehouses.

Brexit supporters and some government ministers have seized on suggestions like this to say that there is no real problem.

Liz Truss, the International Trade Secretary, told the BBC that solutions have been suggested which don’t involve a hard border, or doing checks elsewhere.

However, the EU’s strict rules on checking certain food products may prove to be a potential problem, according to the Revenue Commissioners.

On top of that, carrying out checks in warehouses would seem to conflict with the Irish government’s definition of a hard border, which rules out not only physical infrastructure but also “related checks and controls”.

Taoiseach (Irish prime minister) Leo Varadkar has said Ireland will do everything possible to avoid a hard border, but food and animal checks will be difficult to get round.

“Customs duties can be collected as other taxes are, either online or into tax offices… When it comes to animal checks it’s much more difficult. Animal checks can only possibly be done physically by vets,” he said.

Anna Jerzewska, trade policy consultant at British Chambers of Commerce, agrees that customs formalities can be carried out away from a border, but eliminating all checks would be a stretch.

“That would be a massive departure from existing procedures for any country,” she said.

“There’s a reason borders are not invisible. It ensures some level of compliance and an acceptable level of risk.”

She adds that the European Commission would also have to justify to other member states why these procedures could be used in Ireland and not in, say, Bulgaria.

Leo Varadkar has suggested that this would be the best way to prevent any hardening of the border.

Speaking last month, he said: “The kind of things that we’re looking at and proposing, for example, is that the entire island of Ireland will be treated the same when it comes to agriculture or food and that any SPS [sanitary and phytosanitary] checks would happen at the ports.

“That would mean Britain accepting that Northern Ireland is being treated differently.”

That proposal is similar to elements of the backstop.

The backstop was the most controversial part of Theresa May’s deal with the EU.

It would mean that if a final trade deal was not sufficient to keep the Irish border as it is now, then Northern Ireland would stay aligned to some rules of the EU single market.

That would mean goods coming into Northern Ireland from elsewhere in the UK would need to be checked to see if they meet EU standards.

It would be a huge step for a UK government to implement something like the backstop in the event of no deal.

And the DUP, the Northern Ireland party which supports Boris Johnson’s government, has repeatedly said it is against any new checks on goods coming into Northern Ireland from Great Britain.

Instead, the DUP wants alternative solutions, such as technology, to replace the backstop. But the EU has stressed that technology will not currently be enough to do away with border checks completely.

Could checks take place between Ireland and the EU?

An alternative suggestion is that checks could take place on goods leaving the island of Ireland and destined for the EU.

So, in effect, the border shifts between the island of Ireland and mainland Europe.

But the Irish government has made it clear it would resist any such plan.

Foreign Minister Simon Coveney told the BBC: “If checks are in France or Holland or Belgium, it means that Ireland is being taken out of the single market and customs union.”

What is the UK government going to do?

The UK government published its no-deal plan for the border in March.

It has promised not to introduce any new checks, controls or tariffs on goods coming from Ireland into Northern Ireland.

The plan is intended to be temporary, and the government said its priority would be to enter into discussions with the European Commission and the Irish government to jointly agree long-term measures to avoid a hard border.