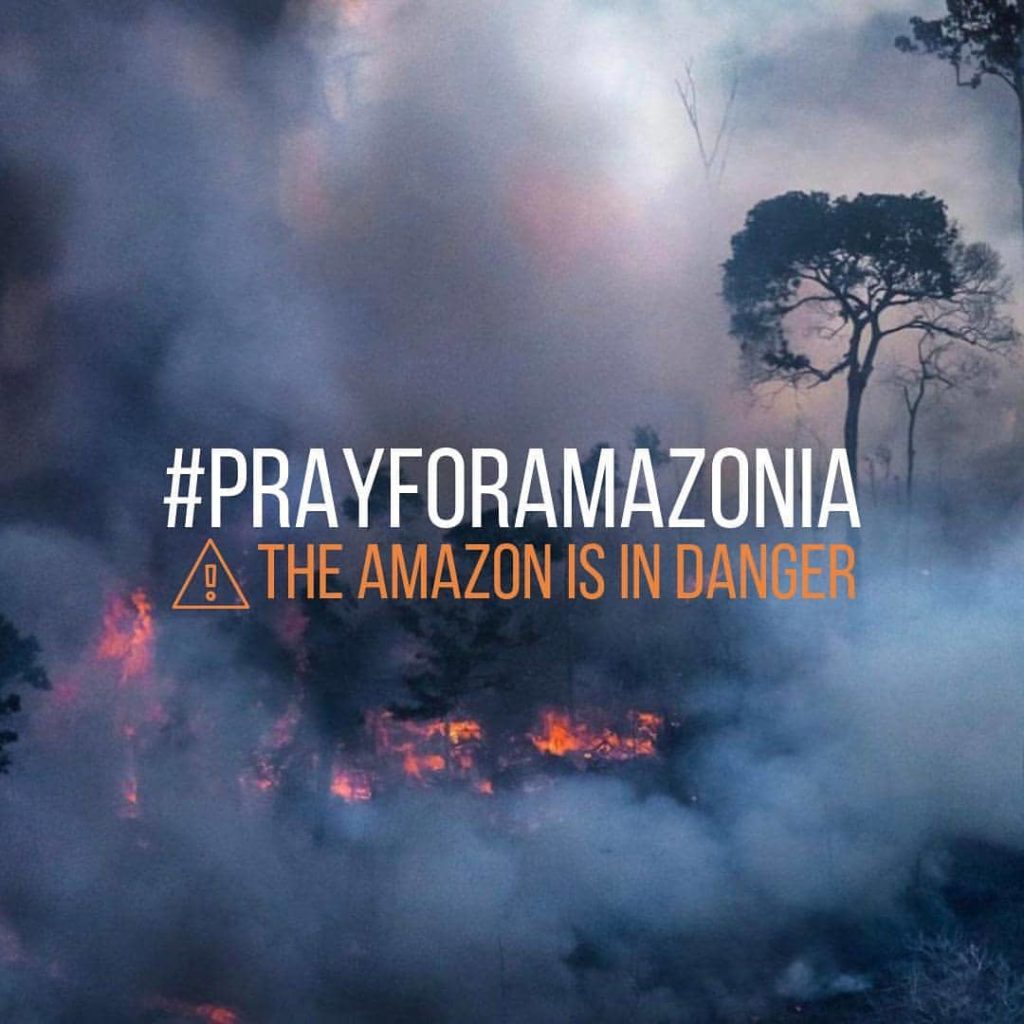 Brazil’s environment minister, Ricardo Salles, has been heckled at a meeting on climate change over the record number of fires in the Amazon.

Satellite data published by the National Institute for Space research (Inpe) shows an increase of 84% this year for all of Brazil.

Some of those at Wednesday’s meeting shouted “the Amazon region is burning”, as Mr Salles stepped on to the podium.

Conservationists have blamed Brazil’s government for the Amazon’s plight.

They say Brazil’s far-right president, Jair Bolsonaro, has encouraged the clearing of land by loggers and farmers, thereby speeding up the deforestation of the Amazon rainforest.

The largest rainforest in the world, the Amazon is a vital carbon store that slows down the pace of global warming.

What happened to Mr Salles?

He took to the stage at the Latin American and Caribbean Climate Week in the Brazilian city of Salvador on Wednesday.

The conference, organised by the United Nations, aims to promote action on climate change in the region and is attended by representatives from non-governmental organisations, businesses and educational organisations, among others.

As soon as his name was announced most of those attending the opening session of the plenary booed and shouted, only a few people clapped.

What are people upset about?

Climate activists and conservationists have been scathing about the government of Jair Bolsonaro and its policies, which favour development over conservation.

They say that since President Bolsonaro took office the Amazon rainforest has suffered losses and an accelerated rate.

Their anger was further fuelled by satellite data showing a steep rise in fires in the Amazon region this year. The figures suggest there have been more than 74,000 fires so far this year for the whole of Brazil, compared to just over 40,000 over the same period in 2018. 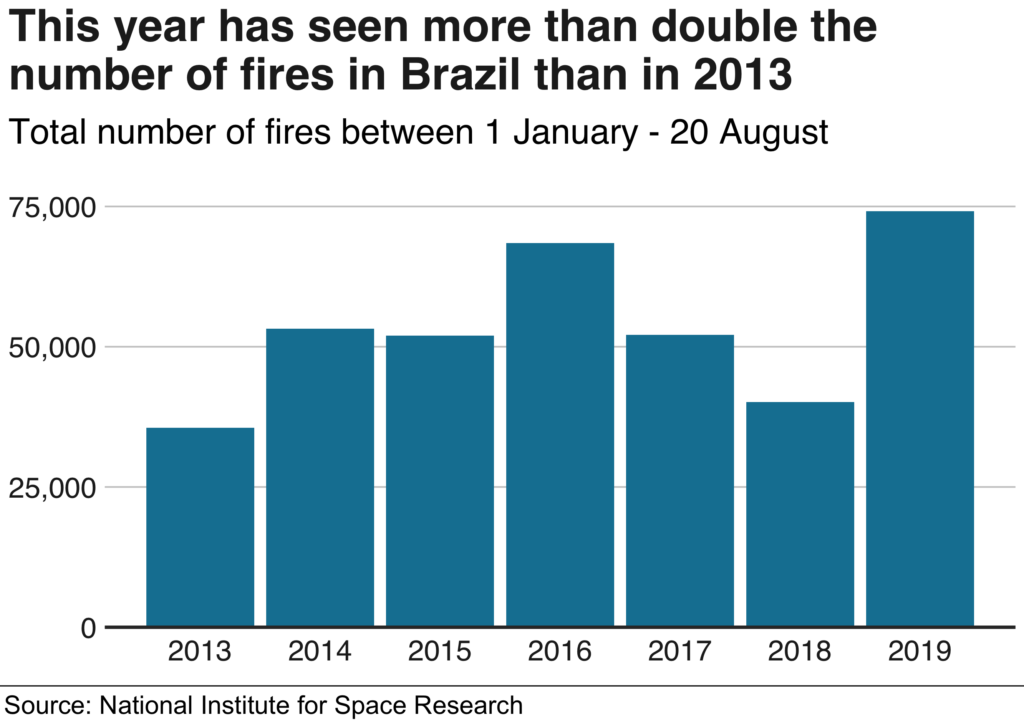 The figures and satellite images showing most of the state of Roraima, in northern Brazil, covered by smoke have shocked many Brazilians and triggered a global Twitter trend under the hashtag #prayforamazonia.

The US space agency, Nasa, has on the other hand said that overall fire activity in the Amazon basin is slightly below average this year.

The region is home to about three million species of plants and animals, and one million indigenous people.

The plight of the Amazon has seen millions take to social media to decry reports of a massive yearly increase in forest fires. But some of the most striking – and viral – pictures shared by social media users are not all they seem.

The hashtag #PrayForAmazonia started to be widely used on Tuesday. It has been included in almost 3 million tweets since. The most widely shared tweet using that hashtag – with more than a million likes and retweets – includes two aerial images of forest fires, neither of which show the current situation.

One dates as far back as 1989. And other widely shared images include fires as far away as Siberia or the United States.

Likewise, video of a Pataxo woman angrily accusing illegal ranchers of starting fires has almost 5 million views. But the video has been shared on social media since at least July. So while it may point to one potential reason for the reported increase in forest fires, it’s not necessarily a depiction of the present situation.

How has President Bolsonaro reacted?

President Bolsonaro further angered those concerned over the spike in fires by brushing off the latest data.

He argued that it was the season of the “queimada”, when farmers burn land to clear it before planting but Inpe has noted that the number of fires is not in line with those normally reported during the dry season.

The president also joked about the criticism directed against him, saying “I used to be called Captain Chainsaw. Now I am Nero, setting the Amazon aflame.”

Later he appeared to suggest that non-governmental organisations had set fires, as revenge for his government slashing their funding. He presented no evidence and gave no names to support this theory, saying there were “no written records about the suspicions”.

“So, there could be… I’m not affirming it, criminal action by these ‘NGOers’ to call attention against my person, against the government of Brazil. This is the war that we are facing,” he said on Wednesday.

It is not the first time Mr Bolsonaro has cast doubt on figures suggesting that the Amazon is deteriorating rapidly.

Last month, he accused Inpe’s director of lying about the scale of deforestation and trying to undermine the government. It came after Inpe published data showing an 88% increase in deforestation in the Amazon in June compared to the same month a year ago.

The director of the agency later announced that he was being sacked amid the row.

What causes the fires?

Wildfires often occur in the dry season in Brazil but they are also deliberately started in efforts to illegally deforest land for cattle ranching.

“The dry season creates the favourable conditions for the use and spread of fire, but starting a fire is the work of humans, either deliberately or by accident,” Inpe researcher Alberto Setzer told Reuters news agency.

Ricardo Mello, head of the World Wide Fund for Nature (WWF) Amazon Programme, said the fires were “a consequence of the increase in deforestation seen in recent figures”.

Over the past decade, previous Brazilian governments had managed to reduce deforestation with action by federal agencies and a system of fines.

But Mr Bolsonaro and his ministers have criticised the penalties and overseen a fall in confiscations of timber and convictions for environmental crimes.