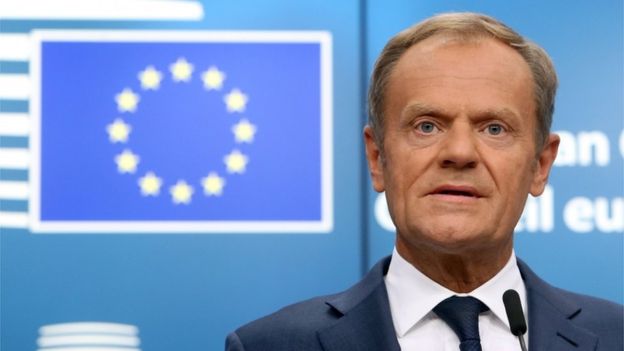 Donald Tusk issues a terse response to the PM’s letter, saying the backstop’s critics have not proposed “realistic alternatives”.

The EU’s Donald Tusk has given Boris Johnson’s call to scrap the Brexit backstop short shrift – with a thinly-veiled dismissal of his demand.

The European Council president wrote on Twitter that those who were opposed to the arrangement, which is designed to avoid the return of a hard border on the island of Ireland, were “not proposing realistic alternatives”.

The terse response comes after the prime minister wrote to Mr Tusk, reiterating his opposition to the “anti-democratic” backstop and saying he is willing to give the bloc the “commitments” it needs that alternatives can be put into effect.

In the letter, Mr Johnson said he cannot support any agreement that “locks the UK, potentially indefinitely, into an international treaty which will bind us into a customs union and which applies large areas of single market legislation in Northern Ireland”.

As an alternative, the PM said the UK was willing to agree to a “legally binding commitment” not to put in place infrastructure, checks or controls at the border with Ireland and would hope the EU would reciprocate.

Since taking office last month, Mr Johnson has said the arrangement is the major stumbling block to getting a deal passed by MPs.

But Brussels has consistently rejected calls to scrap it and reiterated that the deal agreed with former prime minister Theresa May is not up for renegotiation.

“It does not set out what any alternative arrangements could be and in fact it recognises that there is no guarantee that such arrangements will be in place by the end of the transitional period,” she said.

“Otherwise, as we have said on many occasions, we do stand ready to work constructively with the UK and within our mandate.”

In a note circulated to EU diplomats, officials described some of the points in Mr Johnson’s letter as “misleading” and “incorrect”.

The impasse over the backstop is seen as increasing the chances of a no-deal Brexit at the end of October, something the PM has not ruled out pursuing.

This was reinforced by a Downing Street spokesperson, who said in response to Mr Tusk’s tweet: “We are deeply invested in the peace, prosperity and security of Northern Ireland and always will be and we have been clear that we will never place infrastructure, checks, or controls at the border.

“But it is clear that unless the withdrawal agreement is reopened and the backstop abolished there is no prospect of a deal.

“It has already been rejected three times by MPs and is simply unviable as a solution, as the PM’s letter makes clear.

“We are ready to negotiate, in good faith, an alternative to the backstop, with provisions to ensure that the Irish border issues are dealt with where they should always have been: in the negotiations on the future agreement between the UK and the EU.”

Jeremy Corbyn said threatening the EU with a no-deal Brexit “isn’t going to bring about a change”.

“He needs to wise up and stop the nonsense with 31 October and start talking seriously,” the Labour leader said.

Mr Corbyn added: “I would have thought the prime minister should have been more sensitive and say we’ll withdraw the October 31, we’ll discuss an extension with the European Union, and then see where we go from there.”

The PM will this later week head to Berlin and Paris as he tries to secure a new Brexit deal.

Speaking ahead of their meeting, the German leader said the EU is “ready” to look at “practical solutions” to the border issue.

The backstop is designed to avoid the return of a hard border of the island of Ireland if the issue cannot be sorted out between the two sides.

If it kicked in, the UK as a whole would remain in a customs union with the EU, while Northern Ireland would follow further EU rules and regulations in order to keep the border with Ireland – an EU member – frictionless.

But it is opposed by many Conservative MPs and Northern Ireland’s Democratic Unionist Party, which supports the Tories in key Commons votes.

They oppose it because they fear it will weaken the constitutional integrity of the Union – as Northern Ireland would be treated differently to the rest of the UK by following different rules and regulations.

Opponents have also expressed fears Britain could end up being trapped in the arrangement – and by extension the EU.

Alternative arrangements to the backstop have long been touted by supporters of Brexit as a potential solution to the border issue.

They include livestock checks away from the border and a “trusted trader” programme for goods.

The continuing row over the backstop comes as the Brexit Department confirmed UK officials will stop attending most EU meetings from 1 September.

Civil servants and ministers will now only attend EU gatherings where the UK has a significant national interest in the outcome of discussions, like on security.

One serving UK diplomat told Sky News the move was counter-productive, saying: “The suggestion it will save us time is bonkers. We will now have to spend ages working out what happened in the meetings and how it affects us.”