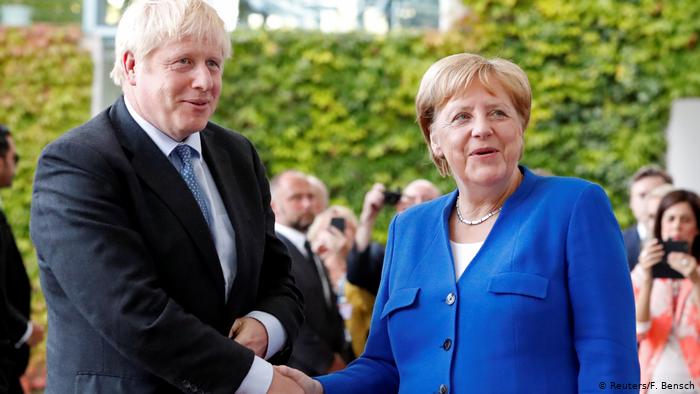 Despite some optimism, the reality is the backstop conundrum is unlikely to be resolved in 30 days.

Has Angela Merkel offered to solve Brexit for Boris Johnson within the month? No, of course not.

The German chancellor was as helpful and optimistic as it was possible to sound in her press conference with the PM on Wednesday – while sticking rigidly to the EU’s hardline unbending position that the withdrawal agreement, backstop and all, negotiated by Theresa May, must remain intact.

Even this positivity was a win for Downing Street.

The backlash to the strident letter Mr Johnson sent Donald Tusk earlier this week ensured his first foreign trip was being accompanied by howl of pain and anger from across the EU.

The comment by Mrs Merkel that has caused excitement was her suggestion the backstop has only ever been a fallback that would be rendered defunct when the nature of the final relationship between the UK and EU is resolved to mutual satisfaction.

This has always been the EU and UK position and should come as no surprise.

She was not promising to excise the backstop, only to listen to possible British alternatives.

She then added that while the EU had expected this solution to take two years to find, if the UK could come up with one in 30 days all the better.

Explained in its fuller context it’s perhaps understandable why Number 10 and, Downing Street claimed, Mrs Merkel herself were resisting interpretations of this as a “30 day deadline”.

It seems more like an arch remark, inviting Britain to solve quickly a problem she thinks they cannot yet resolve, rather than setting a countdown clock ticking.

Indeed some believe that in her constructive tone, while not budging on substance, Mrs Merkel was actually just starting to insulate herself from the no-deal blame game coming if Britain leaves without an agreement with the EU on 31 October.

Some have claimed Wednesday as a big win for Mr Johnson, but even Downing Street was not doing that.

If Mr Johnson wants to hear Wednesday’s messages more starkly, he only need wait til tomorrow.

It appears French President Emmanuel Macron is unlikely to be so opaque.