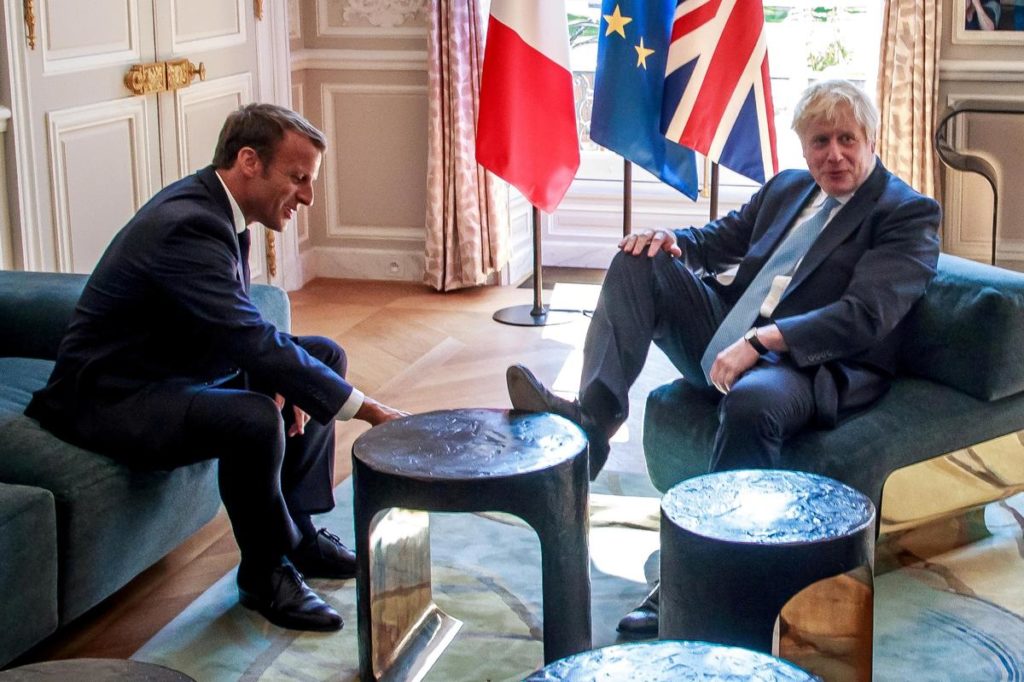 The prime minister arrives in Paris to hear they will “not find a new withdrawal agreement” within 30 days.

Boris Johnson has had his bid to get France’s support for a new Brexit deal in 30 days rebuffed on a trip to Paris.

The prime minister was told by French President Emmanuel Macron that they would “not find a new withdrawal agreement” within a month that is “very different from the existing one”.

However, in a boost for Mr Johnson, Mr Macron said the existing withdrawal agreement hammered out between former PM Theresa May and EU Brexit negotiator Michel Barnier “can be amended”.

The French president said there needed to be “visibility” from the UK over what it wants “in 30 days”, but reiterated the key part of the current deal known as the Irish backstop was “indispensable” and not about “legal quibbling”.

But Mr Johnson remained optimistic, saying “where there’s a will, there’s a way” and adding he was “looking forward to developing those thoughts in the next few weeks”.

In a move that will pile the pressure on Brussels not to create a hard border on the island or Ireland to protect the EU’s single market, he added that “under no circumstances will the UK government be instituting, imposing checks or controls of any kind” there.

He also promised Brexit preparations will make sure a no-deal divorce will be as “pain-free as possible”.

And underlining the importance of ensuring Britain leaves the EU on 31 October, Mr Johnson said it was “vital for trust in politics that if you have a referendum then you should act on the instructions of the voters”.

Their meeting was overshadowed by an intervention from Mr Macron’s ahead of Mr Johnson’s visit to the Elysee Palace, as he warned a no-deal Brexit would be Britain’s fault.

He highlighted EU unity by insisting there was not a “cigarette paper” between France, Germany and other EU countries, saying: “The point can’t be to exit Europe and say ‘we’ll be stronger’, before in the end, becoming the junior partner of the US.”

It comes after Mr Johnson travelled to Berlin to meet German Chancellor Angela Merkel on Wednesday.

She suggested there would be a 30-day timetable for the UK prime minister to come up with a solution to replacing the controversial backstop arrangement agreed by Brussels and Theresa May.

Mrs Merkel clarified her remarks on Thursday, telling reporters in the Netherlands: “I said that what one can achieve in three or two years can also be achieved in 30 days.

“Better said, one must say that one can also achieve it by 31 October.

“It is not about 30 days. The 30 days were meant as an example to highlight the fact that we need to achieve it in a short time because Britain had said they want to leave the EU on 31 October.”

At a joint news conference with Mrs Merkel on Wednesday, Mr Johnson branded the German chancellor’s reference to 30 days a “blistering timetable” but added: “I am more than happy with that.”

He has been calling for the withdrawal agreement to be re-negotiated, particularly to remove the Irish backstop – an insurance policy to stop a hard border reforming on the island of Ireland if a trade deal cannot be struck in time to avoid such a scenario.

Mr Johnson has faced pushback from senior EU figures, such as European Council President Donald Tusk who earlier this week attacked those against the backstop who were “not proposing realistic alternatives”.

The pair are due to meet later this week on the sidelines of this weekend’s G7 summit in France.

Downing Street and Brussels remain in a stand-off with 70 days to go until Britain is due to leave the EU.

Mr Barnier said on Thursday: “The no-deal will never be the choice of the EU. Never.”