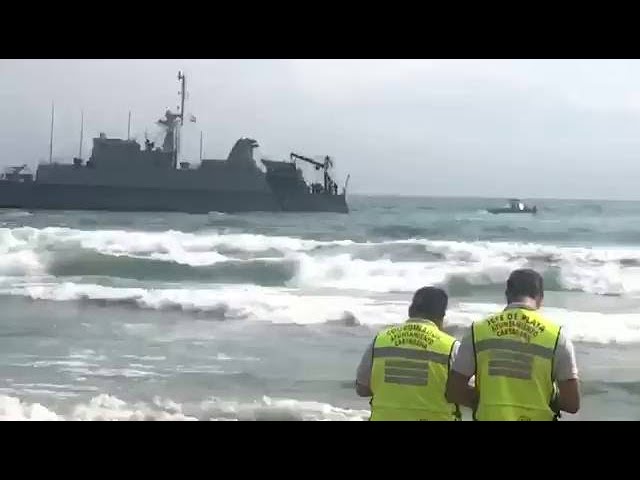 The Navy blames the incident on bad weather.

The Spanish Naval minesweeper ‘Turia’ ran aground this morning (Tuesday) as it joined in the search for aircraft wreckage during the salvage operation following yesterday’s crash of the C101 trainer fighter jet just off the La Manga headland, in which the pilot Comandante Francisco Marín lost his life.

The salvage operation could hardly have got much worse when a navy minesweeper ran aground in shallow water and the crew had to be hurriedly evacuated.

According to sources from the Navy, the incident occurred due to a problem with the  underwater exploration vehicle ‘Pluto’ although they failed to expand on what the exact problem was.

They did say, however, that despite information disseminated through social networks to the contrary, there has been no fuel leak except for a “small amount” that occurred earlier in the day with the bilge.

The incident involving the Turia occurred at approximately 10.30 and immediately water started entering the vessel, although fortunately the Ministry of Defence reports that the fuel tanks were not affected.

Nonetheless some witnesses report a strong smell of fuel, and the crew was rapidly evacuated from the minesweeper with the help of the numerous smaller craft that were involved in the salvage operation.

Navy divers are currently working to minimize the damage to the vessel and, in the words of regional newspaper La Verdad, save the ship from a watery end just a few hundred metres from the shore.

Indeed the ship is so close to land that the drama taking place is in full view of hundreds of onlookers who are gathered along the shore.

Sources now confirm that a barge is heading towards the ship to remove the fuel that is in the tanks, which would avoid possible leaks and lighten the weight of the ship, to enable its rescue.

According to eyewitnesses, the ship is stranded just a few metres from the beach in an area where the depth barely exceeds four metres.

A spokesman for the Ministry of Defence has confirmed that the vessel has developed a leak resulting in the ship’s cold store being flooded and although it has affected the bilge, it has not reached the fuel storage area.

However, work on the salvage operation and to efforts to refloat the minesweeper are both currently being hampered by heavy rain and thunderstorms in the area.