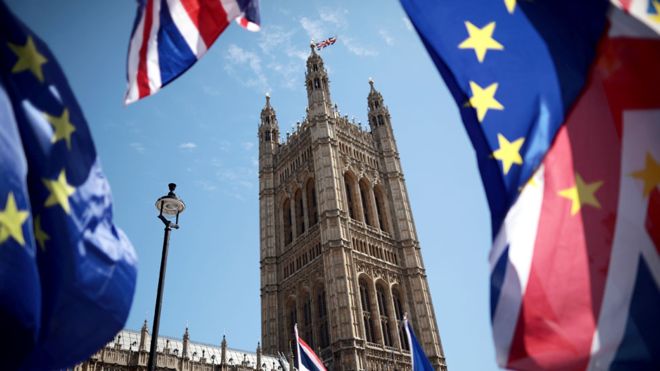 A number of the party’s MPs are poised to back a cross-party effort to block a no-deal exit from the EU, despite the threat of deselection if they do so.

Downing Street has said the prime minister will move to call a snap election if MPs seize control of proceedings in the Commons to hold a vote on legislation to block a no-deal Brexit.

Ahead of this, Labour leader Jeremy Corbyn has said he “fully expects” the bill to pass.

The alliance of MPs will hold a vote on their legislation on Wednesday if they are successful in wrestling control of the order paper from the government later today.

Exact numbers are hard to pin down, but several Tory MPs appear set to support the effort to stop a no-deal scenario on 31 October.

A total of 14 Tories have signalled their intention to vote against the government, according to a Sky News tally.

Ahead of the Commons returning from its summer break, potential rebel Tory MPs went to Number 10 for talks with Mr Johnson.

Downing Street sources told Sky News the meeting was “cordial”, but an MP source said they were “not sure anyone was convinced” to change their minds.

One of those who was at the meeting was former chancellor Philip Hammond, the informal leader of the rebel MPs.

He has predicted they will be successful in forcing the PM to seek a Brexit delay.

Richard Benyon, another one of the MPs who spoke to Mr Johnson, admitted he was on the “horns of a dilemma” about which way to vote.

After Theresa May struggled to get a deal passed by MPs and had to seek two extensions to the Brexit deadline, Mr Johnson has committed to taking Britain out of the bloc at the end of October.

This includes without a deal if necessary, something a majority of MPs are against.

They fear it will cause damage to the British economy and disrupt numerous aspects of day-to-day life.

The likes of Labour, the Liberal Democrats, the SNP and Plaid Cymru are all opposed to no deal.

But efforts to stop it hinge on enough Conservative MPs voting against their government on the issue.

To head off a damaging defeat, the PM has warned potential rebels they will be deselected as candidates in the election he would push for if the Commons votes to block no deal.

However, Mr Johnson’s tough line has caused disquiet within his party.

Dominic Grieve, who served as attorney general under David Cameron, said the threat demonstrated the PM’s “ruthlessness” in power.

“This is undoubtedly a new ruthlessness on the part of the prime minister and I think for a broad church party like the Conservatives I think it bodes ill for us,” he said.

“I simply do not see the Conservative Party surviving in its current form if we continue behaving like this towards each other.

“This is now becoming a heavily ideological party being led in a way I don’t identify as being Conservative at all.”

Mr Hammond, who was re-selected as the Tory candidate for Runnymede and Weybridge on Monday, has warned of the “fight of a lifetime” if party officials try to stop him from standing at the next election.

Tory MP Justine Greening has confirmed she will back the push to block no deal.

The former education secretary has also confirmed she will not stand at the next election.

Ms Greening said her fears the Conservative Party was turning into Nigel Farage’s Brexit Party had “come to pass” and accused Mr Johnson of “narrowing down” the party’s appeal.

But Downing Street has made clear that he will act if MPs vote to “wreck” the government’s negotiating position.

Defeat in any election would mean Mr Johnson would go down as one of the shortest-serving PMs in history.

His brief time in Downing Street so far has been eventful, with one particular flash point his decision to suspend parliament for five weeks in the run-up to Brexit day.

This decision has been the subject of legal challenges, with one of them taking place in Scotland.

Court papers disclosed during that case have revealed that Mr Johnson and senior adviser Dominic Cummings were asked on 15 August whether an approach should be made to suspend parliament.

A note of “yes” was written on the document, Edinburgh’s Court of Session heard.

The PM replied in a handwritten note the next day, describing the September session of Parliament as a “rigmarole” designed to show MPs were “earning their crust”.