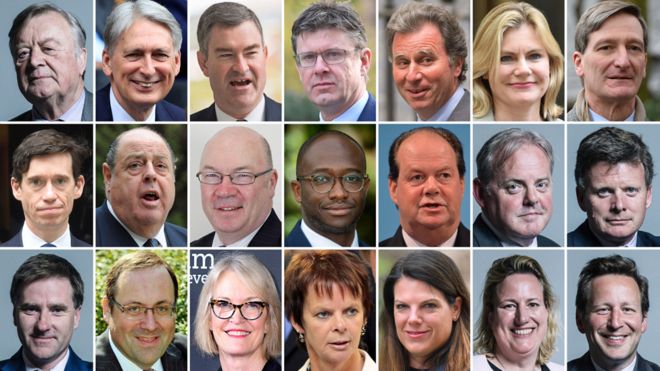 The prime minister has faced a rebellion by senior Conservative MPs over plans to effectively block the UK leaving the EU without a deal on 31 October.

In all, 21 Tories backed a motion which paves the way for legislation to delay Brexit until January 2020 unless Parliament has agreed a new withdrawal agreement by 19 October, or agrees to a no-deal exit.

The ringleaders of the rebellion, who held talks with Boris Johnson earlier, were senior figures in Theresa May’s and David Cameron’s governments.

A Downing Street spokesperson said the rebels would have the Tory whip removed.

The former chancellor has reportedly been co-ordinating the rebels’ efforts.

On Tuesday morning, he told the BBC he believed the group “had the numbers” to defeat the government, insisting the move was not simply designed to block a no-deal exit but also to give Parliament proper time to scrutinise and implement any new deal agreed.

The 63-year-old voted for Theresa May’s Brexit agreement three times, but has become a bogey figure for many Tory Brexiteers. They believe he has consistently exaggerated the economic risks of Brexit and sought to frustrate planning for no deal while in charge of the Treasury.

The Runnymede and Weybridge MP has said he will vigorously contest any attempt to deselect him as a candidate in the next election, potentially through legal action. That threat has been issued by the Conservative whips’ office in an attempt to bring would-be rebels into line.

Theresa May’s former justice secretary is another key figure – so much so that he and his anti-no-deal associates have been dubbed the “Gaukeward squad”.

The 48-year old former solicitor – who was George Osborne’s number two at the Treasury in pre-referendum days – has said a no-deal exit would be a “big mistake” for the UK and he would not be “complicit” in something which would see people lose their jobs.

The South West Hertfordshire MP faced calls earlier this year from some activists in his constituency to deselect him.

Confronted with the same threat now from No 10, he said he was prepared to put the national interest ahead of his own future career prospects by voting against the government. He said he believed Downing Street wanted to carry out a “purge” of dissenting voices.

Unlike Mr Hammond and Mr Gauke, Mr Grieve has been a frequent and high-profile rebel over Brexit during the past two years – opposing Theresa May’s withdrawal deal three times.

The former attorney general is a strong supporter of another referendum on the UK’s future in Europe, with the option to remain.

The 63-year-old says he regards a no-deal exit as “unacceptable” and will always vote against it – even if his career takes a hit.

The Beaconsfield MP has said he wants to fight the next election as a Conservative but being deselected is a price he is willing to pay.

Earlier this year, he lost a vote of no confidence by local Conservatives following a “robust discussion” about Brexit.

Another former chancellor, Mr Clarke is the most strongly Europhile member of his party and has long been out of step with its views on Europe.

He opposed the 2016 Brexit referendum and was the only Tory MP to vote against triggering the Article 50 process for leaving the EU.

He has gone as far as to suggest he would vote against the government in a vote of no confidence in order to stop a no-deal exit.

The 79-year old has previously suggested he might stand down as MP for Rushcliffe at the next election.

The ex-cabinet minister was a ringleader in attempts by MPs in April to hammer out a Brexit compromise by seizing control of the parliamentary timetable.

He also spearheaded a cross-party bill which would have compelled Theresa May to seek a Brexit extension earlier this year, and will be the one to make the application to the Commons Speaker for an emergency debate later.

A consummate Westminster insider, he is a leading “soft Brexiteer” who believes the referendum result must be honoured while maintaining close economic links with Europe.

The West Dorset MP has said he will not contest the next general election.

The former education secretary announced on Tuesday she would stand down as MP for the overwhelmingly pro-Remain constituency of Putney in south-west London whenever the next election comes.

She warned that Parliament’s ability to be a force for change, particularly in terms of improving social mobility, was being compromised by “Brexit myopia”.

She voted three times against Theresa May’s Brexit agreement, saying it neither delivered on the promises made to Leave voters or gave younger Remain voters anything.

Warning her party was morphing into The Brexit Party, she said she would support legislation to keep all Brexit “options on the table” and to ensure Parliament has a real say in the outcome.

The former international development secretary released a video confirming he would vote against the government and explaining the reasons why.

He said claims a no-deal exit would be a “clean and easy break” from the EU were disingenuous as, in reality, it would lead to years of economic and political uncertainty.

Mr Stewart, who during the Tory leadership campaign accused Mr Johnson of not being straight about his views on no deal, suggested such an outcome would be “remembered for 40 years”, and would permanently damage the party’s reputation.

Other MPs who rebelled:

Greg Clark: The former business secretary was one of the strongest advocates of Theresa May’s Brexit deal. He has said no deal would be “ruinous”.

Sam Gyimah: The former universities minister said there was “no mandate” for a no-deal exit which would be “damaging and disruptive” for his constituents.

Antoinette Sandbach: The MP for Eddisbury said it was “important to act” to stop any chance of no deal and she would put her constituents’ interests ahead of her own.

Alistair Burt: The former Middle East minister, a respected figure in the party, has said he has a “fundamental and unresolvable” disagreement with the party leadership over Brexit and he will be standing down as MP for NE Bedfordshire at the next election.

Stephen Hammond: He has accused Tory Brexiteers of “lecturing others” about loyalty. He told the BBC’s World at One he would “reluctantly” vote against the government.

Sir Nicholas Soames: Winston Churchill’s grandson was among those who met the PM on Tuesday for last-ditch talks.

Margot James: The former digital minister has been highly critical of no deal on social media and backed Mr Gauke’s comments.

Richard Harrington: The 61-year old has rebelled over Brexit before and recently announced he would stand down as MP for Watford at the next election.

Guto Bebb: The Aberconwy MP, who is also quitting at the next election, says a vote against no deal is “truer to Conservative tradition than anyone who traipses through the lobbies out of fear, opportunism or simply unthinking loyalty”.

Caroline Nokes: The Romsey MP has said her constituents would be worse off under a no-deal Brexit and their futures mattered more than her own as a Conservative MP.

Ed Vaizey: The ex-culture minister has said a no-deal exit would hurt the digital economy although he told Buzzfeed News he had yet to decide which way to vote.

Steve Brine: The former health minister said last week he was prepared to hold the PM to his claim a no-deal exit is a “million to one chance”.

Anne Milton: She has kept a low profile since quitting as a minister in July but attended a meeting with other likely rebels in Westminster earlier on Tuesday.

Richard Benyon: The MP for Newbury is a former fisheries minister in the coalition government.