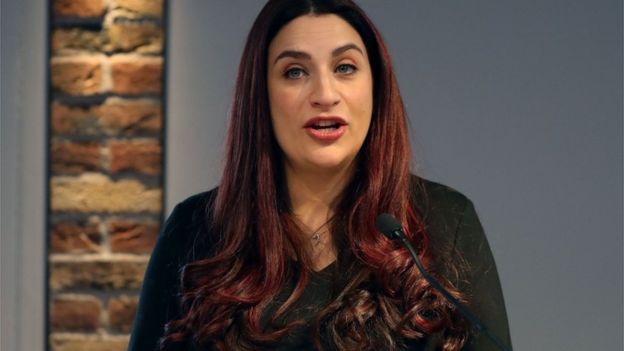 Former Labour MP Luciana Berger has joined the Liberal Democrats, saying the party is “unequivocal in wanting to stop Brexit”.

She said leader Jo Swinson had offered “a vital, positive alternative” to Labour and the Conservatives.

Ms Berger left Labour in protest at the handling of anti-Semitism allegations.

Along with six other MPs she formed Change UK, but left after disappointing results in the European elections earlier this year.

Ms Swinson said she was “delighted” to welcome Ms Berger to the Liberal Democrats.

“We’re thrilled to add her perspective, expertise and skills to our ever-growing parliamentary team,” she said.

Speaking to the BBC, Ms Berger, MP for Liverpool Wavertree, said: “We need to do everything possible to make sure the country, when the election comes, has a proper choice rather than choosing between the two terrible options of Johnson vs Corbyn.”

“The two-party system is over,” she added.

She accused the MP of lacking the “courage” to resign and hold a by-election.

Ms Berger is the fourth MP in three months to join the Liberal Democrats – who now have 16 MPs in Parliament.

On Tuesday, Conservative Phillip Lee defected to the party, accusing the government of “pursuing a damaging Brexit in unprincipled ways”, putting lives and livelihoods at risk.

Who is Luciana Berger?

Ms Berger has been the MP for Liverpool Wavertree since 2010, where she has a majority of 29,466.

Before becoming an MP she worked for management consultancy company Accenture and the NHS Confederation, a body representing healthcare organisations.

Before leaving the Labour Party, she faced the threat of a no-confidence vote from local Labour members for criticising Jeremy Corbyn, but it was withdrawn after individuals in the constituency party were accused of “bullying” her.

Shadow chancellor John McDonnell said any attempts to deselect her had been a result of her association with a breakaway party.

She attended a protest against anti-Semitism in the Labour Party in Westminster’s Parliament Square in March 2018, and has campaigned vigorously on the issue.

This is not massively surprising. We have seen a steady trickle of those unaligned, lost MPs moving to the Lib Dems.

The Remainers are beginning to shuffle towards the Lib Dems as the most clear, overt force for Remain.

There is no doubt that Brexit is now really beginning to play for the party. For everyone who wants to stop Brexit, they are a natural home.

And new leader Jo Swinson has injected a bit of energy and colour which frankly Vince Cable was unable to do.

They’ve got a bit of mojo and we’ve seen that in the polls too.