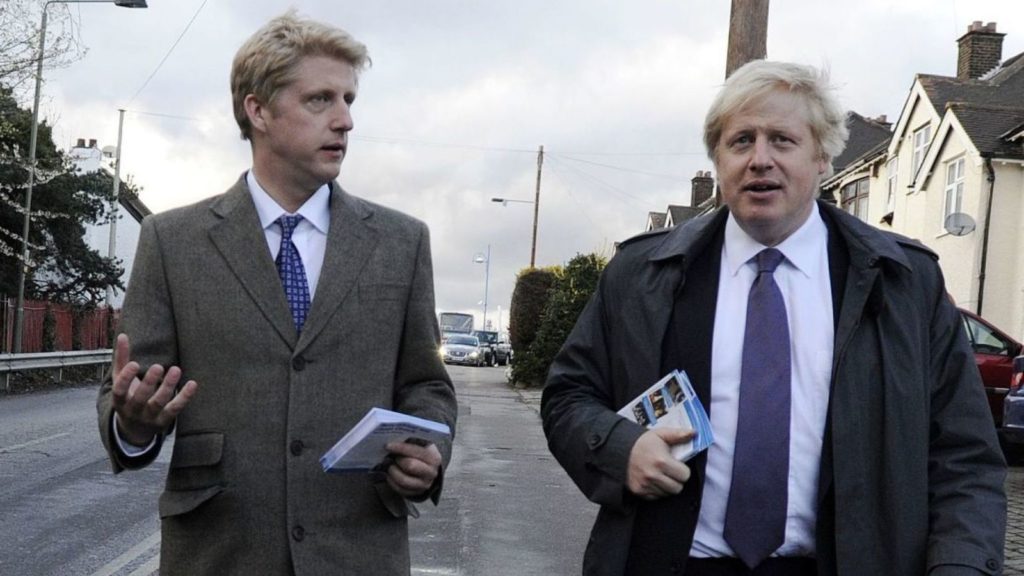 The prime minister’s brother has quit as a government minister and MP as he cited an “unresolvable tension” between “family loyalty and the national interest”.

Jo Johnson, who was appointed to government by Boris Johnson in July, used his Twitter account to announce it was “time for others to take on my roles as MP & Minister”.

He wrote: “It’s been an honour to represent Orpington for 9 years & to serve as a minister under three PMs.

“In recent weeks I’ve been torn between family loyalty and the national interest – it’s an unresolvable tension.”Jo Johnson, who will stand down as an MP at the next general election, attended the cabinet in his role as universities minister.

He backed Remain in the 2016 EU referendum.

His resignation on Thursday is the second time he has quit government in 10 months.

He quit Theresa May’s government last November in protest at the ex-PM’s Brexit strategy and to call for a second EU referendum.

Responding to his resignation, a Number 10 spokesperson said: “The prime minister would like to thank Jo Johnson for his service.

“He has been a brilliant, talented minister and a fantastic MP. The PM, as both a politician and brother, understands this will not have been an easy matter for Jo.

“The constituents of Orpington could not have asked for a better representative.”

Jo Johnson’s announcement adds to a bruising week for his brother.

The prime minister is reeling from four defeats in the House of Commons in two days, including being blocked in his move for a general election this month.

He has also been criticised for effectively expelling 21 Tory MPs from the party, including two ex-chancellors, for voting against him on Brexit.

The prime minister will later accuse Labour leader Jeremy Corbyn of “a cowardly insult to democracy” if he continues to ignore his call for a general election.

Regardless, Downing Street is treating Thursday as “the first day of the general election campaign”.

Chancellor Sajid Javid echoed Mr Johnson’s call for an election during an interview on Thursday morning.

With parliament still at deadlock over how to proceed with Brexit, Mr Javid told Sky News: “We’ve got to a point where we need to let the people decide.”

“And – especially when it comes to Brexit – who do they want to talk to our friends in Brussels and to get a deal so we can exit the EU on 31 October, and be prepared to leave with no deal if that’s what it comes to.

“Do they think that should be Boris Johnson or Jeremy Corbyn?”

Labour shadow chancellor John McDonnell told Sky News his party would back an early general election once “the legislation is through” to block a no-deal Brexit.

On Wednesday night, MPs voted in favour of a bill that would compel the prime minister to agree a new three-month delay to Brexit – to 31 January 2020 – if he fails to agree a new withdrawal agreement with the EU next month.

The legislation has now passed to the House of Lords for consideration by peers, with the government having ended its attempts to disrupt the passage of the bill through the upper chamber in the early hours of Thursday morning.

This has cleared the way for the bill to formally become law on Monday.

Mr McDonnell said: “We’re retaining as much control as we possibly can of the date of that election.

“The issue for us is our overriding objective… we said in our manifesto we would not support a no-deal Brexit.

“Everything we’re doing now is about protecting the country.”

The shadow chancellor also accused the prime minister of acting like a “two or three-year-old having a tantrum” with his demand for an early election, with Labour being the “grown-up in the room”.

However, Mr McDonnell did admit there is a “range of views” with Labour over what date they should fight a general election.

Senior members of the party’s shadow cabinet are understood to be pressing Mr Corbyn to wait until November – after the current Brexit deadline – before agreeing to go to the polls.

Liberal Democrat leader Jo Swinson also suggested she wants to wait until a fresh Brexit delay is in place before an election is held.

Ms Berger said: “This is a moment of national crisis.”The Liberal Democrats are unequivocal in wanting to stop Brexit and are committed to securing Britain’s future as a tolerant, open and inclusive society.”

The Liverpool Wavertree MP quit Labour in February and, explaining her reasons for leaving the party, cited “a culture of bullying, bigotry and intimidation”, as well as “institutional antisemitism”.

She helped establish the new Change UK party but, in June, left to join a looser grouping of independent MPs in the Commons.