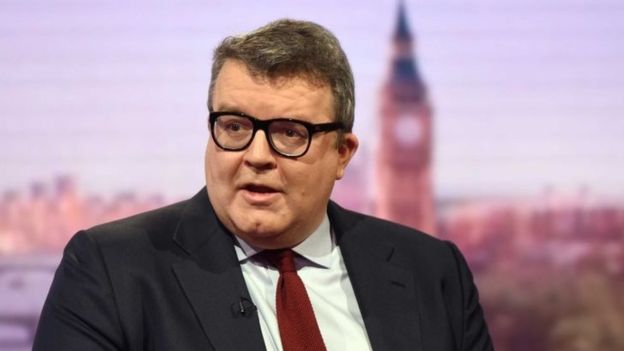 Labour should “unequivocally back Remain” in a fresh Brexit referendum and only then pursue power in a general election, its deputy has said.

Tom Watson said there was “no such thing as a good Brexit deal” and the 2016 Leave vote had been “invalidated”.

Jeremy Corbyn said he did “not accept or agree with” his deputy’s view.

“Our priority is to get a general election in order to give the people a chance to elect a government that cares for them,” he said.

The Labour leader wants to hold another referendum once Labour has won power, in which voters would have the choice to remain in the EU alongside a “credible” Leave proposal.

However, he has said he would only choose a side once the shape of any revised Brexit deal negotiated by a Labour government became clear.

The BBC’s political correspondent, Chris Mason, said Mr Watson was directly elected as deputy leader by party members, not appointed by Mr Corbyn, and so has a right to roam on policy other shadow cabinet ministers might not get away with it.

In a speech in London, Mr Watson said while an autumn general election seemed inevitable “that does not make it desirable”.

“Elections should never be single issue campaigns,” he argued, suggesting vital issues such as the future of the NHS, economic inequality and crime would be “drowned out” by the prime minister’s “do or die” Brexit message.

“The only way to break the Brexit deadlock once and for all is a public vote in a referendum,” he said. “A general election might well fail to solve this Brexit chaos.”

In the event of another general election in the coming months, Mr Watson said Labour must be “crystal clear” about where it stands on Brexit if it wants to get a hearing for the rest of its domestic policy agenda.

“There is no such thing as a good Brexit deal, which is why I believe we should advocate for Remain. That is what the overwhelming majority of Labour Party members, MPs and trade unions believe.”

Mr Watson will said that, though “very difficult”, he and many others “respected the result of the 2016 referendum for a long time”.

But, he added: “There eventually comes a point when circumstances are so changed, when so much new information has emerged that we didn’t have in 2016, when so many people feel differently to how they felt then, that you have to say, no… the only proper way to proceed in such circumstances is to consult the people again.”

The Liberal Democrats, who pushed Labour into third place in May’s European elections with a strident anti-Brexit message, are pushing for Brexit to be stopped in its tracks by revoking Article 50 – the legal process for the UK’s departure.

While stopping short of calling for that himself, Mr Watson said it was not too late for Labour to “win back” Remain voters.

“My experience on the doorstep tells me most of those who’ve deserted us over our Brexit policy did so with deep regret and would greatly prefer to come back,” he added.

“They just want us to take an unequivocal position that whatever happens we’ll fight to remain, and to sound like we mean it.”

Former Labour leadership contender Owen Smith said Mr Watson was speaking for “the majority of Labour members and Labour voters”, and that the party “should be clearing the Brexit issue off the table before we get to an election”

But another Labour MP, Gareth Snell – one of a group of MPs in the party wanting to bring back an amended version of Theresa May’s original withdrawal agreement – said the “numbers simply don’t exist” in Parliament to approve a further referendum.

He told Today: “The public have no appetite for a second referendum. The doors I knock every week… [voters] are not telling me they want to go back to the divisive referendum [but] they want a decision on this process to be taken as soon as possible.”

Just 24 hours after Jeremy Corbyn hammered out a deal with the Labour-supporting unions, his deputy, Tom Watson, shattered any fragile unity.

Mr Watson and many Labour activists want a clearer commitment to campaign on a Remain platform – especially during a snap election.

So, apart from his own scepticism towards an EU that he believes needs reform, what is the thinking behind Jeremy Corbyn’s position?

The two men, who used to be close friends, fell out spectacularly in the aftermath of the Brexit referendum during an uprising by Labour MPs against Mr Corbyn’s leadership.

The union leader suggested Mr Watson was “languishing on the fringes” of the party, adding: “It’s sad. Now and again Tom pops up from where he has been hiding and comes up with something… which is normally to try and undermine his leader.”

The Conservatives said Mr Watson had made it clear he wanted to “cancel” the 2016 Brexit referendum result.

Labour has voted twice against Boris Johnson’s plans for a poll on 15 October.

The party’s leadership has insisted it is eager for an election after the risk of a no-deal Brexit on 31 October has been ruled out.