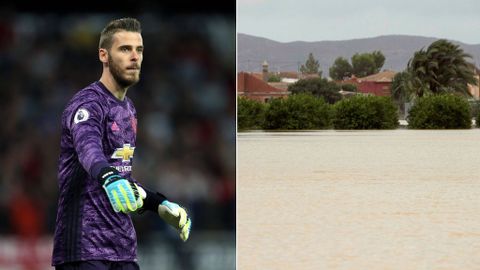 The Manchester United goalkeeper has been thanked by Spain’s Red Cross for his financial gesture.

Manchester United goalie David de Gea has donated £175,000 to the victims of the devastating Spanish storm which claimed the lives of seven people.

Spain’s Red Cross confirmed the cash donation by thanking the shot-stopper for his generosity yesterday/on Thursday.

The organisation said in a social media message alongside a picture of the footballer: “€200,000 to support the people affected by the flooding in Alicante and Murcia.

“David de Gea, thanks for your solidarity.”

The provinces of Alicante and Murcia were the worst affected by last week’s storm, with torrential rain causing widespread flooding and leaving many areas cut off.

The army had to help evacuate thousands of people from their homes after rivers burst their banks.

The ‘gota fria’, as the storm was called in Spanish, also led to travel chaos after forcing airports to shut temporarily.

It claimed the lives of seven people including a 66-year-old Dutch man who was washed away by a torrent of water in the town of Dolores near Alicante.

De Gea, said to have become Man U’s highest-paid player after signing a new five-year deal earlier this month which hiked his weekly take-home pay to around £255,000-a-week, was born in Madrid.

But his father was born in Redovan in Alicante province and was brought up in the nearby town of Orihuela, among the worst-affected by last week’s storm.

De Gea, 28, was included alongside the likes of Cristiano Ronaldo and Leo Messi in a list of the most generous footballers published by Spanish sports daily As last year.

It flagged up his £30,000 donation to a charity in Mozambique, saying children at an orphanage had benefited from the cash.

The Spanish goalkeeper had been linked to Paris Saint-German and Juventus before Man United confirmed earlier this week he had signed a new club with the club.

The new contract keeps him at the Red Devils until at least June 2023 and there is an option to extend for a further year.