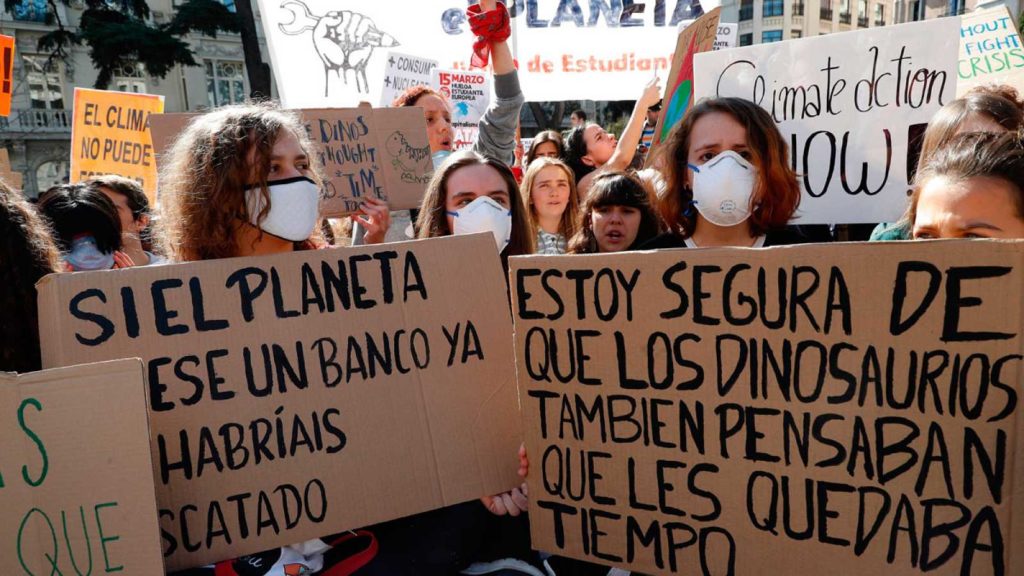 Hundreds of thousands of residents hit the street yesterday (Friday) across Spain, joining in with a global strike calling for urgent action to halt climate change.

Although the climate march in Madrid was the largest – with over 100,000 joining in – almost every large or medium-sized town nationwide staged their own, including the Alicante province towns of Dénia, Jávea and Calpe.

Whilst it is mainly the world’s youth – inspired by Sweden’s teenage activist Greta Thunberg – who are leading the campaign to save the planet, people of all ages took part in the march which started at around lunchtime and was still ongoing by the evening.

Banners and slogans carried powerful messages, including: “If the planet was a bank, it would already have been bailed out;” “Don’t mess with our children’s futures;” “Injustice, demonstration, we want a world without contamination;” “We’ve had it up to our lungs with so much emissions;” “On foot for the future;” and, in a tribute to the now-famous schoolgirl activist who delivered an impassioned speech at the UN Climate Emergency Summit in New York at the weekend, “Don’t worry, planet: Greta’s here.”

Protesters in the Valencia region carried miniature fallas, or colourful papier mâché statuettes like the house-sized monuments displayed on the streets during their March festival of the same name, in the shape of burning planets.

Greenpeace and WWF representatives, among the demonstration organisation team, said governments and companies need to ‘take decided, urgent and efficient action’ now the planet is ‘at a critical moment’, that the movement had long needed to bring young people on board because ‘joining forces is fundamental’.

They called Spain’s and the world’s participation in the massive climate strike ‘an historic day’.

Last Friday, the ‘Fridays For Future’ movement founded by Greta staged their biggest-ever school strike for climate change, with millions of children, teenagers and young adults from all over the world joining in – but yesterday’s event was even more ground-breaking since entire communities took to the streets and even many workers opted to go on strike for the day.

The right-wing PP and far-right Vox did not take part.

Errejón said the youth of today was ‘giving adults a lesson in maturity’.

“They’re telling us that politicians need to deal with what’s really important in life and on the planet,” he said.

“All governments and all parties should be listening to their voices.”

General Workers’ Union (UGT) secretary Pepe Álvarez warned that ‘the planet was dying out’ in the face of a ‘non-declared climate emergency’ that ‘economic interests should take note of as soon as possible’.

Elsewhere in the world, schools are taking on teachers with a background and qualifications in environmental science to give lessons to children on climate change, what they can do to slow it down, and how the world needs to adapt to the global warming that has already happened or cannot be prevented.