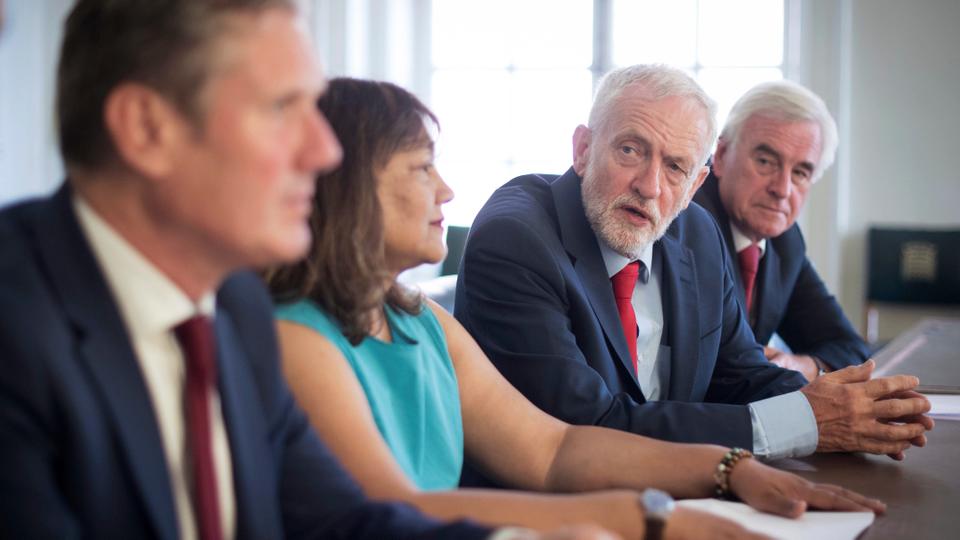 Opposition parties will not call for a vote of no confidence in the government to topple the PM this week.

Speaking after cross-party talks, Labour leader Jeremy Corbyn said he will back a motion “at a point we can win it and take no-deal off the table”.

The SNP’s Ian Blackford said his party was keen to push for an early no confidence vote but wanted to take the other parties with them.

The cross-party group also requested an emergency debate on disclosure of no-deal Brexit planning papers, but this was rejected by the Speaker John Bercow.

Chancellor Sajid Javid has said a no-deal Brexit “may well happen” on 31 October, despite a law aimed at avoiding it.

The law, known as the Benn Act, forces the government to ask for an extension to the Brexit deadline if a deal is not agreed by 19 October, the day after a two-day EU summit.

‘All options in play’

The Labour leader said the parties were “absolutely clear we will do all we can within a Parliamentary scenario and within our own parties to prevent this country crashing out on the 31st October without a deal – that is what is our agreed position”.

When asked about options to ensure that including beefing up the Benn act, a motion of no confidence in the government or an emergency debate, Mr Corbyn said: “All those options are in play.”

Mr Corbyn said there were “huge political differences” between the parties, “but we have come behind this point to stop a no-deal Brexit”.

Opposition parties have been working together over the last few weeks to try and thwart Boris Johnson’s Brexit strategy.

But with some worried the PM might be able to get around legislation to avoid no deal next month – there are real disagreements about what to do next.

The SNP spent the past few days trying to drum up support for a confidence vote to bring down the government and install a temporary PM to extend the Brexit deadline.

Other parties have ruled that out today because they can’t agree on who should lead it.

There is a clear divide between Labour – who think it should be Jeremy Corbyn – and the Lib Dems, who don’t.

So any hopes a big move from opposition parties this week has been sunk – because they just can’t agree on what it should be.

Ms Swinson said a “precipitous” vote of no confidence motion could “increase the risk” of a no-deal Brexit and “play into Boris Johnson’s hands”.

Party whips will meet to consider different scenarios including the possibility of an “insurance” option of a Government of National Unity, Ms Swinson added.

This would see a temporary “caretaker” prime minister heading a coalition of opposition parties – Tory veteran Ken Clarke or Labour grandee Margaret Beckett have both been mentioned – but it is likely to be resisted by Labour.

However, Ms Swinson rejected the possibility that her MPs could back Mr Corbyn as an interim prime minister, saying he would not command a majority in the Commons.

“He simply does not have the numbers,” Ms Swinson said, referencing the 21 MPs expelled from the Conservative Party and the five within the Independent Group for Change.

“I have been crystal clear but I will do so again – Jeremy Corbyn is not going into Number 10 on the basis of Liberal Democrats’ votes.”

Ian Blackford, Westminster leader for the SNP – which wants a vote of no confidence as soon as possible – told Sky News: “We have to do everything we can and that includes a motion of no confidence and there’s more work to be done on that over the coming days.

“We need to stop Boris Johnson crashing us out [in a no-deal Brexit], that is our priority, that is what unites all of us.

“I’ve made it clear that we want a motion of no confidence, but we need to do that on a basis that other parties come with us as well.”

Earlier, Chancellor Sajid Javid told BBC Radio 4’s Today programme that “every government should observe all laws at all times”, adding: “We’re taking a careful look at that law.”

“We’re also very clear that our policy has not changed. We will leave on October 31,” he said.