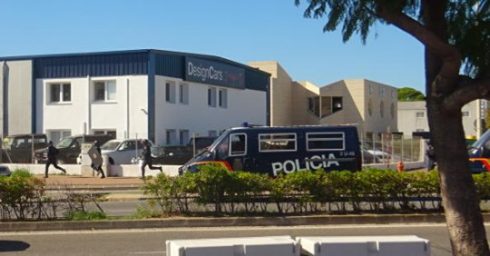 The ‘largest organised crime group in eastern Spain’ has been brought down following a seven-nation investigation that saw 81 arrests, the seizure of 4,000kg of cocaine and 800 bank accounts frozen.

‘Operation Beautiful’, coordinated by Spain but involving law enforcement authorities from Colombia, France, Portugal, Romania, Sweden and the United Kingdom, and supported by Europol, dismantled the ‘violent gang’ in a string of sting operations last week.

More than €1 million in cash was found in the panic room of the ringleader’s house as Policia Nacional seized three firearms, jewellery, precious gems, luxury watches, 42 vehicles, a 25m-long yacht and properties worth €20 million across the country.

At present, those arrested are charged with laundering over €7 million, according to a statement from Europol today.

Operation Beautiful started in 2018 with Europol coordinating complex investigations throughout the seven different countries into drug trafficking and money laundering.

The operation concluded on September 26, when more than 200 police officers carried out 13 house searches in Valencia, Alicante, Madrid and Barcelona.

A luxury car garage on Calle Liverpool, in Javea, was one of the crime scenes as around 50 Policia Nacional agents arrested the owners and impounded vehicles from 9.30am last Wednesday.

Several models of Mercedes, Lexus, BMW, Land Rover, as well as a Ferrari, were reportedly impounded in the process.

The 25m-long yacht is understood to have been seized by Guardia Civil in Denia port.

Implicated in the monumental operation is the ex-director of Denia’s football club – CD Denia – who was arrested in Santander while agents were raiding the car dealership in Javea.

Various persons in the hotel industry around Javea and Denia are understood to have been detained by police;

The criminal group is understood to have transported narcotics in boats, lorries, trailers and cars with hidden compartments, and to have made use of a clandestine laboratory.

The criminal network had different highly structured groups, specialised in various activities, such as a security team in charge of counter-surveillance, debt collections, extortion and vuelcos (violent robberies between organised crime groups while impersonating police officers).

Europol described the gang as ‘particularly violent’, and had recently had a member murdered in the El Campello.

The multiple arrests and seizures during the long investigation reportedly made the members bolder and more reckless, leading to the detection of money movements between the leaders of the organisation.