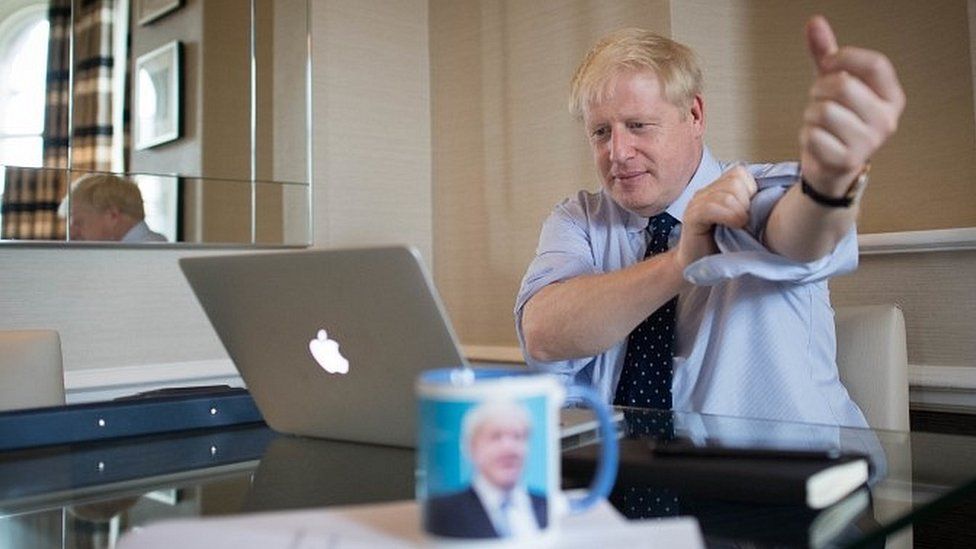 Sources within the Democratic Unionist Party (DUP) have told the BBC they are pleased with Boris Johnson’s new Brexit proposal to replace the Irish backstop.

It reported an Irish Sea “regulatory border” and customs checks between the Republic and Northern Ireland.

Addressing his party conference on Wednesday, the PM ruled out “checks at or near the border”.

He also said the proposal would “protect the existing regulatory arrangements”.

The unconfirmed newspaper report in the Daily Telegraph also said the proposed four-year time limit would give the Northern Ireland Assembly a vote in 2025 on whether or not to extend the arrangement.

In his speech to the Conservative Party conference, Mr Johnson described his plan as a “compromise for both sides” which would “protect the union”.

“We will under no circumstances have checks at or near the border in Northern Ireland,” the prime minister said.

“And by a process of renewable democratic consent by the executive and assembly of Northern Ireland we will go further and protect the existing regulatory arrangements for farmers and other businesses on both sides of the border.

“And at the same time we will allow the UK – whole and entire – to withdraw from the EU, with control of our own trade policy from the start.”

Before the conference, BBC News NI’s political editor, Mark Devenport, sought reaction to the newspaper claims of the UK’s purported “final offer” to the European Union.

“DUP sources appear happy and content with the proposal because they say the backstop was anti-democratic; gave Northern Ireland no say,” said our political editor.

“But under the Boris Johnson offer, the Northern Ireland Assembly could choose to stay with this EU regulation, or move towards [regulatory alignment with] Great Britain in 2025.

“And the way that voting would operate in the Northern Ireland Assembly is that unionists, if they didn’t like the road that Northern Ireland was going down, would be able to veto that and move towards Great Britain.”

However, the Irish government has consistently rejected previous proposals that have involved customs checks on the island of Ireland or a time-limited backstop.

When unconfirmed reports of the UK’s proposals emerged late on Tuesday night, Tánaiste (Irish deputy prime minister) Simon Coveney said he had not seen the details but he, again, rejected the idea of a time limit.

“So the rumour mill this evening is suggesting that there would be a four-year time limit and then a choice to be made by Northern Ireland at the end of that period, but again that’s all speculation,” Mr Coveney told Virgin Media’s The Tonight Show on Tuesday.

“Our position has been very clear on a time-limited backstop. If it’s time-limited, and you can’t answer the question what happens at the end of that time period, then it’s not a backstop at all.”

Mr Coveney added that if the reports were true, then “it doesn’t look like it’s the basis for an agreement, that’s for sure”.

The Daily Telegraph reported that the UK plan “effectively means that Northern Ireland will remain in large parts of the EU single market until at least 2025 – but will leave the EU customs union alongside the rest of the UK”.

The paper added that the proposals are likely to face “fierce opposition from EU leaders who will be asked to grant the UK sweeping exemptions from EU customs rules to facilitate a Northern Irish customs border”.

“A regulatory border in the Irish Sea and a customs border across this island will strangle the local economy and runs contrary to the interests of communities and businesses here.”

On the basis of the report, Mr Eastwood has called on the leaders of the UK’s biggest parties to vote Mr Johnson out of office.

“I have written to the leaders of the Labour Party, the SNP and the Liberal Democrats at Westminster today asking them to take part in an unprecedented act of political selflessness to stop this chaos and protect the fragile interests of Northern Ireland,” the SDLP leader said.

“They must come together, pass a motion of no confidence in Johnson and unite behind a common candidate as a temporary measure to extend the Article 50 period.”

Alliance leader and MEP Naomi Long said: “This proposal is in many ways the worst of both worlds, as we’ve gone from having no new borders to having two.

“There is no respect for the particular complexities of Northern Ireland, our interdependent economy and society, and the Good Friday Agreement.”