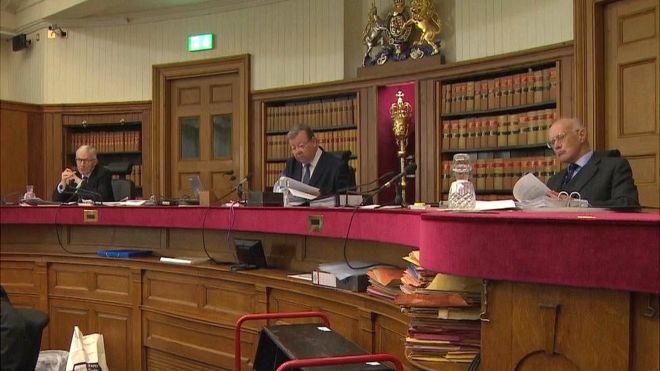 A Scottish court has delayed a decision on whether to sign a letter requesting a Brexit extension if Boris Johnson refuses to do so.

Campaigners asked the judges to agree to enforce legislation passed by MPs aimed at preventing a no-deal exit.

The Benn Act requires Boris Johnson to ask EU leaders for a delay if a deal has not been agreed by 19 October.

Judges at the Court of Session said they could not rule on the matter until the political debate has “played out”.

The court will sit again on 21 October, with the judges saying the circumstances should be “significantly clearer” by then.

A previous court opinion had said there was “no doubt” that the prime minister had agreed to abide by the law, but the campaigners claimed he could still look to “frustrate” the legislation.

They want the court to use its “nobile officium” power to, in effect, sign a letter to European leaders on behalf of Mr Johnson if the prime minister refuses to do so himself.

Mr Johnson has previously said he would “rather be dead in a ditch” than seek another delay beyond the current 31 October exit date.

On Monday, Lord Pentland said the UK government had accepted it would “comply fully” with the Benn Act, and that there was “no proper basis” on which the court could decide that it would not.

The Inner House panel of judges, led by Lord Carloway, agreed with this ruling – but said that “circumstances may change over the next ten days”.

They said that “the political debate must be played out”, and agreed to reconvene after the deadline set down in the legislation to decide on the next steps.

Lawyers for the UK government argued that international relations should be the responsibility of ministers rather than the courts and that the government was entitled to promote its own policies, provided it does so “lawfully” and without “frustrating” legislation passed by MPs.

But Aidan O’Neill QC, for the petitioners, said it appeared Mr Johnson might still try to get around the intention of the Benn Act and take the UK out of the EU without a deal on 31 October.

Highlighting remarks from sources inside Downing Street that talks with the EU could break down this week, he said it was clear the government’s policy was to “undermine” and “frustrate” the legislation.

However, the judges ruled that statements made in a “political context” did not necessarily mean the prime minister would not comply with the law.

Lord Carloway wrote: “Until the time for sending the letter has arrived, the PM has not acted unlawfully, whatever he and his officials are reported to have said privately or in public.

“The situation remains fluid. Over the next two weeks, circumstances will inevitably change.”

He said the “normal course” would be to dismiss the petition, but this would leave little time for the campaigners to lodge a new one in the event of Mr Johnson refusing to comply with the Benn Act.

The judges therefore continued the case until 21 October, because “the position ought to be significantly clearer” by then.

Ms Cherry said the delay was a “victory” for her side, and that the judges had “given the prime minister time to fulfil the promise he made to the court”.

The judges haven’t agreed to intervene and sign the Brexit letter on the prime minister’s behalf – but importantly, nor have they ruled out such a move.

Lord Carloway said campaigners “would be entitled” to ask the court to consider stepping in, should Boris Johnson fail to comply with the Benn Act.

This might seem to kick the can down the road a bit, but it means the court’s role remains very relevant in the coming days of Brexit drama.

Whatever move Boris Johnson decides to make, the possibility of another courtroom challenge will be hanging over him.

That uncertainty just adds to his current difficulties – it’s another Brexit question mark for the prime minister at a crucial moment.

The procedure of petitioning the nobile officium is unique to Scots law, but is far from being a forgotten backwater of the legal system.

Its name is a Latin term meaning the “noble office”.

In this case, it would see an official of the court sign a letter to the EU requesting a Brexit extension, as set out in the Benn Act, should the prime minister refuse to.