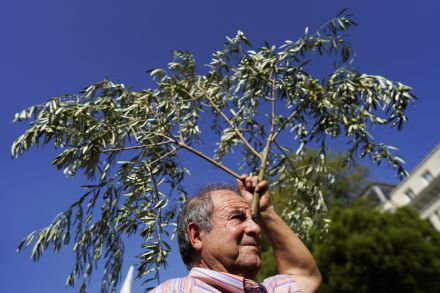 Several thousand olive farmers have marched through Spain’s capital to protest plunging prices and to demand protection from tariffs the United States plans to levy on European Union on agriculture products.

Many of the protesters waved olive branches as they marched to Agriculture Ministry headquarters in Madrid on Thursday chanting for fairer prices.

They claim distributors have driven down what they pay for olive oil so it can be sold at cheaper retail prices.

The farmers also want Spanish government measures to offset a 25% tax on EU agricultural imports the U.S. is preparing to impose.

One banner at the march read “USA Abuses” and featured a cartoon of U.S. President Donald Trump.

Organizers said the protesters represented some 250,000 families that make a living from olive farming in Spain.